Gabriel and I agree on some things, and not others; for example, my plump larvae don't whirl in a demonic blood tornado and tell people to die. They do other bad stuff. But do they aspire to be hellborne assassins? 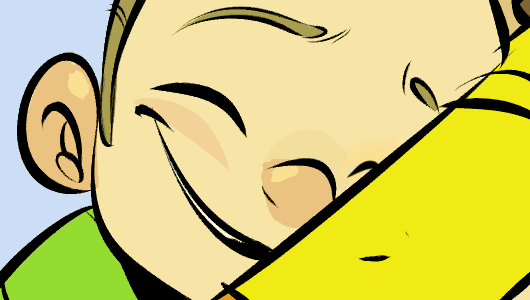 I essentially follow the ESRB; it's a tool I've found useful, but I'm not its servant. If there's something I think the souls in my charge might find nourishing at all, I show them very select portions. But they might have seen ten or twelve frames worth of M rated games their whole lives, just in the period it takes them to get in the room and for me to pause it while shouting "Child beasts! I have a very important flag at the moment!!!"

My daughter "plays" Overwatch in a very specific way. As far as she knows, Overwatch is a game where incredible women try on rad clothes, because the Hero Gallery is the only thing she's ever gonna see. The main thing I've taken away from it is that Ronia doesn't give a shit about shooty men. She only cares about Jetpack Ladies and Soviet Superwomen.

In another inspired thumbnail, we have captured DM To The Stars Chris Perkins apparently mid-piracy in this week's thrilling episode of Acquisitions Incorporated! Also: subscribing to the channel is a thing that very, very cool people do.