I had today's strip named "The Eyes Have It," even though we had a strip named that in 2000, because there has to be a statute of limitations on this shit. But then a Twitter Person claiming to be "Eric Baldwin" wondered why I hadn't named the strip "Vitreous Humor," which is an amazing name that I stole instantly. 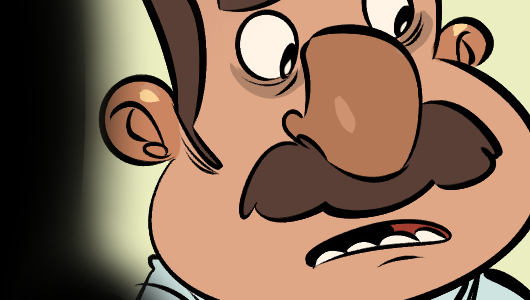 Now, we may continue.

I was blessedly unaware of Hatchimals until Grobe revealed all; they are another one of these devices engineered for children to love them, and the twist is that when you get the toy it is an egg and it has to peck its way out. There are so many possible points of failure in such a thing that tear-filled Christmas mornings are virtually guaranteed; we were looking at the official site which referenced certain, unnamed "challenges" people were experiencing and the strip wrote itself in seconds.

If one of my child-beasts had asked for one of these things, I would tell them that desire is a the source of all suffering and that they needed to transcend the world of dust. They didn't ask for this kind of shit anyway because they're erudite AF. My daughter wanted a library card and my son wanted to explore cryogenic options. And it's just, like… granted. In both cases. Granted, my autonomous, bipedal spirit prisms.

I know people who won't play SUPERHOT VR because it's currently an Oculus Rift exclusive. Exclusivity doesn't exist in any real way on the PC, so this is more about being devoted to an ideal, or being seen to have devotion to an ideal, and it's your life; spend it how you want to. But - and let's distill it as ShVR from here on out - ShVR is the apotheosis of the first-person shooter. So you can play with rocks while you embroider your doctrinal bonafides, or you can ascend to Godhood. The choice is that stark.

Each shooter exists in a space which contains itself and other shooters. They can be narratively about this or that. But when all the bald space marines are removed, the highest virtue is Precision, informed by and floating in a solution of Time. And since Time in SUPERHOT or ShVR is not free flowing but a resource directly controlled by player movement, time and precision are brought into profound alignment, made synonyms, in a purpose-built universe engineered for their purest expression. This is what Wolf and Doom gestured vaguely at. This is what we have been trying to accomplish.

The Oculus Touch controllers are incredible tools for this purpose, they're cleverly designed, comfortable, and broad in their capacity for input. You can rest your hand in the basket, you can feel loose. Oculus can't rest there forever, of course; months before the Touch hit retail a fascinating Vive input prototype was already in developer hands: one that knows, and may even covet in some digital way, the expressive power of the human paw. Currently, grip/squeeze is much more natural on Touch, and that's good, because snatching a weapon out of the air with your hand is the best Game Thing I've "felt" this year and possibly ever.

The base experience was already amazing, I devoured it - but the thesis is simply better, truer, more itself when experienced inside a simulated reality. I know where enemies are even if they aren't in my field of view, objects retain their "reality" by virtue of their position. I can throw a knife to my left and right without even looking; I can grab a sawed-off from on top of a garbage can because I saw it before. I can make five seconds go perfectly, exactly how I want it to, and I do. Over and over. That is SUPERHOT VR.

The game is a mixtape of every amazing action movie trope, every moment of lethal prowess, and it rains down on you scene after scene. The fantasy of unidirectional harm is rendered optimally, ultimately. The only thing you can say about it that isn't laudatory is that there isn't enough of it. But then, there couldn't possibly be; they've made a place where you can do things exactly right, where you can stop for a second and think about what to do, and then reliably accomplish the impossible.