It wasn't quite this simple, but it was fairly simple. 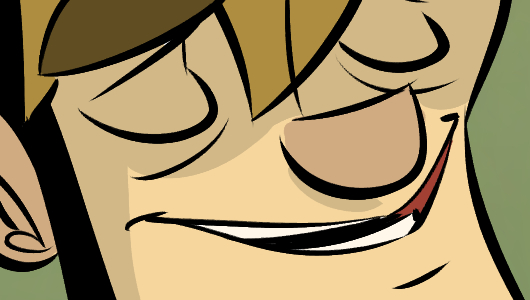 I, um… okay. I did take off my glasses and coat and put on a stocking cap (which might be a tuque, beanie, or "knit cap" where you're from) and go in to buy another one. But none of them were for me; I don't even have one yet. I'm getting them for people at the office and I like the hunt - I've only played on Gabe's. I thought I was super smooth; the person who told me I couldn't have another one was stocking a shelf not three feet from me, so I had to order the product completely nonverbally. I thought I had been super smooth, but one of them tweeted me later and said they let it slide because they thought it was funny. STILL COUNTS.

Welcome to the homepage of Acquisitions Incorporated. It's been a long time coming; we love doing it, but when you are very close to something it's hard to discern scale. When I started being known as Omin as much as, if not more than Tycho or even the pale vampire orb Jerry Holkins, I was like… huh. What would a smart person do about this?

I could not be more pleased with the work Gavin and Dabe put into on the site, and it was a trial by fire for our new engineer Mike Buland, who hooked everything up on the backend using a a bunch of new shit he had to learn in real time. Elyssa Grant, our new Project Manager, showed me that precise scheduling is not necessarily a tool of Satan. There's plenty to read on the page, but there is also a robust Portfolio section you can use to see the entire history of the company - podcasts, comics, live shows, the Series, anything you would care to. Be sure to stop by the Gift Shop, of course, stocked with a few things you might not have seen before. And that's just the start.

On March 16th, we launch Acquisitions Incorporated: The "C" Team, in collaboration with HyperRPG. They've been using our studio for awhile now, so I see them all the time. It'll be fun to get in the mix with their other shows. There's even a trailer! It starts streaming on Twitch every Thursday, beginning March 16th, at 3:30pm PST. Very, very excited to get back behind the screen.

I feel like I figured out my thing. The excitement has extended into my hands, and it has made typing this difficult.