Playing games with Gabriel, as I have for many years, involves a certain cadence. Around ten o'clock at night the action must pause while he obtains and then noisily processes snacks of various kinds. Historically, it was Oreos. 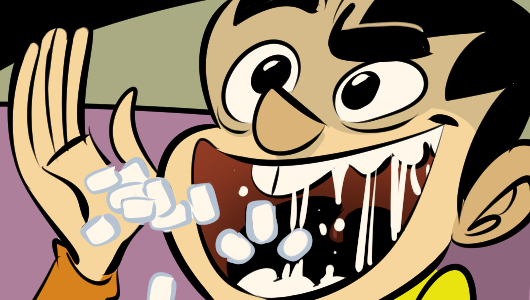 (An aside. Looking at the word, I wonder if there is some kind of Oreo stickler, akin to the Lego stickler. As in: when I go to the official site, a cursory examination does not turn up the word "Oreos" at all. Oreo Sandwich Cookies, sure. This never occurred to me before.)

His consumption of this caloric form factor was so high that he needed a term to describe what it meant to eat an entire trench of these cookies at a time. He called this "eating a sleeve." It's not an act I've ever required the linguistic terminology to contain. I don't think I could eat that many even if I wanted to. I would wander off perhaps halfway through the column, leaving a single frosted half uneaten on the counter by an ample portion of milk. I imagine that image is, even now, drilling through his consciousness.

He has apparently switched to handfuls of mini-marshmallows, a fact I discovered when we were discussing his ascent up the ARMS hierarchy. I'm hoping I can convince him to show me his gruesome techniques on Friday afternoon's stream. I don't have much interest in mastery, not least because I can't attain it; I like to eat a couple discrete concepts from the box and throw the rest away. When he decides to get good at something, though, it's a lot of fun to watch.