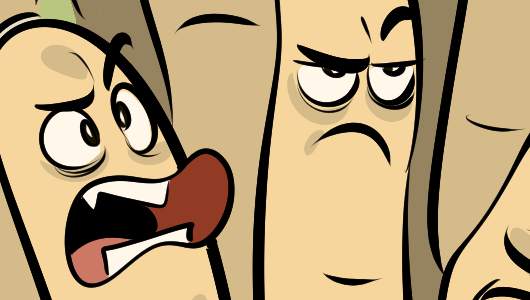 As an adult, I was surprised and delighted to learn that Hair Metal (I'm aware there are more technical terms, subgenres which begat subgenres, etc.) continued to progress elsewhere in the world after it stopped being a going concern here. That is the ground Housemarque treads: they make arcade games in a world that has, by and large, cast the arcade aside.

Tim Rogers calls it Metroid Contra, and he's one of like three people whose opinions on games I give any kind of shit about. It's got bullet hell way down in it, and it has a control scheme that I can sort of succeed with until my fingers revolt. It is a game where a lot of shit happens and you are given the tools to create your own solutions.

In other news, we've announced our newest intern for the live Acquisitions Incorporated game at PAX West - the Tiefling Sorceror Strix, played by Holly Conrad. Her last name ends with the word Rad, which is all you absolutely need to know, but she is a prolific creator of stories, characters, and costumes who is featured (among other places) on Chris Perkins' own D&D Show Dice, Camera, Action! Among other things, this is the latest piece of continuity that expresses an invigorating concept: that some of these campaigns exist in the same world.

If you aren't already a fan of hers, I'm overjoyed to introduce you - we've got a two and a half hour Podcast called "Enter The Trash Witch" to bridge the gap between the game at PAX East. Lots of cool details in there about pulp adventure available in Chult, some interpersonal fireworks, and a strong tee-up for the game at PAX West.