I'm still thinking about my SCA shit up at last weekend's Banner War, partly because I got sick there so I've had a lot of time to lie completely motionless except for wracking coughs and the occasional turn, as meat is turned on a grill, to let the mucus collect in the other lobe of my sinuses. 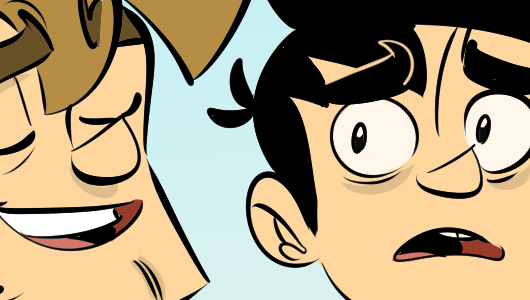 Here is the comic which recounts a vital portion of the experience. I always wonder how I'd fare in another context; statistically speaking, "dead at another's hand in the service of someone I don't know" is probably the correct assessment.

Because it did not fit especially well into the distillation I wrote on Monday, I neglected to describe the events of Friday night in my tent. I was as cold as I have ever been in my life, nothing I brought was proof against it. The wind from the river blew straight through whatever artifice I'd constructed to confound it. The second night, Mike Fehlauer gave me a massive leather cloak that handily resolved the base issue. I started to experience various bursts of erratic thoughts, and the dumb thing is that anybody could have helped me but I didn't ask for help because I was the new guy and this type of thing was situated firmly within the guardrails of "New Guy Shit."

Invariably, every profoundly negative experience I have had has been a source of wisdom given enough time to process it. Let me save you some time with the first one: ask for a fucking blanket. Giving someone a blanket feels incredible. People will fight over who gets to give you an extra blanket, that's how good it feels.

The second is that I assessed the protective power of the tent incorrectly because every other time I've slept in this tent Brenna was there with me. The truth of that, way down, couldn't even be understood with language in the state I entered that night. It was rendered, instead, as some kind of animal axiom I was subject to and did not honor. It is nice, on rare occasion, to have your value structure reassessed involuntarily by an unaccountable, external, immutable force.

So, I had a high fever and I saw some shit, but now I'm back on my grind-equivalent operational status: At noon PDT, join myself and brewmaster Eric Benson for another potable episode of Acquisitions Intoxicated right on Twitch - and we'll be… Shit, we'll be doing a lot:

1. Discussing Drinking Culture In The SCA
2. Brewing the brutal stout we cooked up with our friend Holly Conrad(!!!)
3. Sampling glasses of Jim Darkmagic's Velvet Cape
4. Crafting a new recipe with the stream for Viar
5. Deciding what to make next week!

After a short break, we'll be back with the final case of co-op Choose Your Own Adventure game Mythos Tales played collaboratively with the stream. I've never been so sad for a game to end, it's really been a great part of my life these last few months and I hope you've had fun coming along.