I woke up at five A.M. terrified that I had not put up the post, even though I thought I had done the math correctly about when the post needed to be executed and have been thinking about it constantly for two days. It's not a joke! Next you're gonna tell me it's Friday where you live. What? That's true?!? 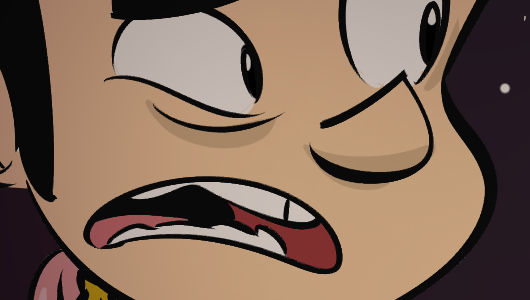 The last chapter of the weird flight to Australia comics is up, and given what Mike posted yesterday it's starting to become clear to me how this series ended up so surreal and scary.

Gabe and I react to the same stresses in opposite ways; this is the Hard Mode of interpersonal relationships. He would be very happy in a hermetic bunker full of sharp pencils and thick, blank paper. My drive is to be the person required of me, the person my friends need, and generally speaking that means doing things here on the Earth's haunted crust. It's helpful to others, but I'm not claiming altruism: this is just my version of his thing, and its tinged with the same manias he's talking about. Deep down, I am a bunker person also. That is why we get along. But I can't do what needs to be done in there.

Gabe is one of the best Dungeon Masters I've ever played with, and I've been playing games like this for… what the fuck is it. Like, thirty-five years? The humor and dialogue, rendered in real time, are an envy of mine. He put it all on the table in the first episode of Acquisitions Incorporated: Star Wars, and my suspicion is that you're going to enjoy it a lot. I want to thank my friends Kris Straub, Holly Conrad, and Jesse Cox for being such an excellent crew on the Mynock.

Just like a couple years ago, my friend Kris Straub and I wrote a comic we're gonna draw on the second day of the show. Last time we got after it on the PAX Aus stage, we crafted a sensual new breed of entertainment: Vesperotica. Characterized by frantic wing-play and those weird noses bats have, it's a highly technical genre that requires a custom lexicon - perhaps even a sexicon - called "Vesperanto" to maximize its unique texture. He'll also be joining me for the auction we're doing at the show in support of CheckPoint, an Australian group focused on the intersection of mental health and gaming. I want to thank him for backing me up here, even though there's some kind of brutal Australian pollen we don't have and it has annihilated his voice whenever it's not making him sound like a movie announcer.