I started taking Lexapro almost exactly 10 years ago and it has truly changed my life. Before medication I was dealing with crippling anxiety. I went back and found my post from 2008 where I tried to explain what chronic anxiety is like. I know it’s hard for folks who don’t have it to really understand. The things I worry/obsess about are trivial to most people. My wife might be concerned about something for a few minutes and then move on with her day but I would lose weeks to what is essentially a constant state of panic.

Before Lexapro flying to the various comic conventions we attended was a nightmare. I felt safe at home and being away from that safety was a real struggle. Jerry can probably tell you stories about trying to keep me calm/sane while on flights to Kansas City or Baltimore. Since I started taking Lexapro traveling has been much easier. I can fly all around the country to the various Paxes we do without too much trouble. The one exception being PAX Australia. The flight itself is so long and the destination is so far from my home and my family. The truth is that this particular trip cuts right through my Lexapro like a Vibroblade through Plasteel. Sorry, I’ve been reading a lot of Star Wars.

A couple years ago I had to cancel the trip all together because of a panic attack that landed me in the hospital. I remember a few days before the show I was driving into the office and obsessing about the trip when I started to get very dizzy. I made it to the parking lot, got out of my car and just started puking. I called Kara and she came and took me to the hospital. They ran a bunch of tests and then sent me home and told me to rest. I honestly don’t remember much of the next week. I remember being ashamed that I could not go to the show. I remember feeling depressed and feeling absolutely horrible because I felt like I had let everyone around me down. I also remember Larry Hryb stopping by my house to check on me. He lives nearby and dropped off one of the new Pro controllers they had just come out with. I was pretty out of it at the time but thanked him later as it really meant a lot to me. It was a very kind gesture at what was the lowest point of my life.

My “job” is very strange. In fifth grade I decided I wanted to draw comics for a living but in my head I imagined I would spend my days alone at my drafting table drawing. This is the ideal state and indeed the natural habitat of the Mike Krahulik. The idea of traveling around the world hosting massive conventions and appearing on stage in front of thousands of people was never even a consideration. The person I need to be in order to do a PAX is so far removed from my comfort zone it’s almost comical. The fact that I am able to do it at all is honestly a miracle considering how opposite it is to my nature. I’ve been doing it for over a decade at this point and I’ve gotten pretty good at it I think, but it has never gotten "easy". My current trip has been particularly hard though and I am incredibly sorry to say that I’ve decided I need to head home a little early. It has just been too much for me this year and as much as I want to be the guy who can do this...I am just not always that guy.

I will be at PAX Australia on Friday doing all my normal stuff. I will run the Star Wars Acquisitions Inc. game. I’ll be signing autographs, trading pins and just generally trying to meet as many of you as I can before I head home on Saturday. I have signed a bunch of stuff for the Aquisitions Inc. autograph session on Sunday as well. Again, I want to apologize to the folks down here in Australia. It’s ironic because you are probably the most friendly and welcoming group of Paxers there is. I think this is where I say “it’s not YOU, it’s ME!” I know that’s cliche but in this case it really is true. I have a great deal of affection for all our fans down here and honestly I’d feel even worse if I didn’t already know how understanding you will all be.

The reality is our community is one that understands mental health. It’s something Jerry and I have been vocal about for more than a decade now. I’ve talked to thousands of readers over the years who have expressed to me that they feel similarly or that our conversations helped them understand a loved one with anxiety and depression better. Well, like the old Hair Club for Men, “I’m not just the president, I’m also a client!” This isn’t just a bunch of talk, it’s something I live with every single day.

I very much hope that my shortened stay does not inconvenience anyone. I’ll be tweeting about my location on Friday so if you want to find me, it should not be too hard. Otherwise I hope you have an incredible PAX Australia and thank you for being the absolute greatest community of fans a weirdo like me could ever hope for. 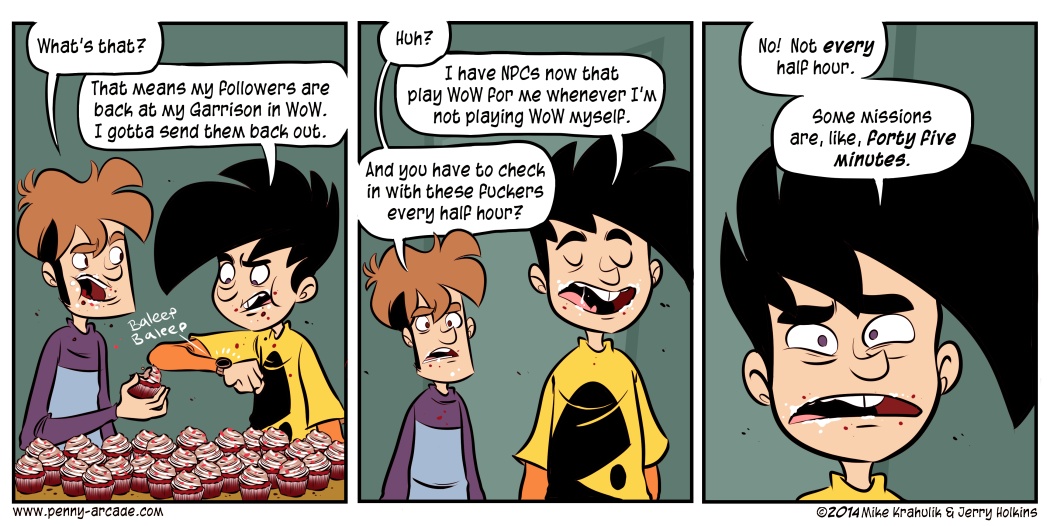