My flights were cancelled many, many times, both on the way into hashtag PAX South and out; while I was writing today's strip I learned that I'd lost the reservation I'd made to account for the previously lost reservation. It flipped several times during the next hour until I was able to get a flight that would work - sort of - provided I could get there in the next twenty minutes with my wife and moist larvae in tow. 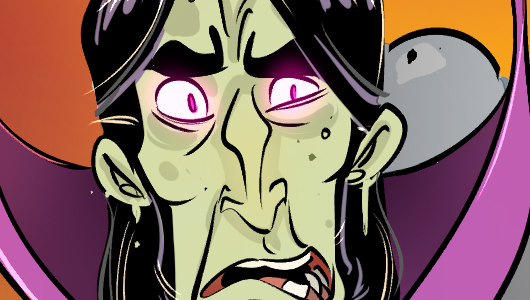 Traffic generally might have been an issue, but there was essentially nobody in San Antonio that would willingly drive anywhere because the same weather that fucked up the skies as a mode of travel was busy fucking the Earth also. I'm from Spokane, where the extreme distance from the Face of God creates an oppressive, preternatural cold; sleet can make every window of your car opaque in seconds. Everybody still gets home somehow. Rain was hitting the road down there, individual drops, and they collaborated in the formation of an impromptus ice rink. From the hotel to the airport, I saw five cars. This is not an exaggeration for effect. We were were one of the five cars. Our cabbie crossed himself as we hit the on-ramp.

There's around six hours of Acquisitions Incorporated games out of PAX South in total, currently all available in Twitch in smaller pieces, but we'll get it all up soon in the other formats you expect. The main takeaways are that Saturday's AcqInc game is apparently the best one, and the Acquisitions Incorporated: The "C" Team game - the premiere of Season 2 - has inaugurated the next chapter of that story. It continues Next Wednesday, 4-7pm PST every week.

It didn't really hit me until I was on stage saying it, but we've delivered four PAX Shows in five months - five, if you count PAX Dev. I don't think that this is something just anybody can pull off, and I'm not complimenting myself there. I'm recognizing the efforts of the people I work with at Penny Arcade and the unstoppable Enforcer corps that enables "conventions" that move beyond "events" and into the realm of true cultural practice. That's not something we can do - it's only something we can try to enable. It's something - as I have said before - you bring with you. I'm at the part after PAX where the disconnection from the hive is most keenly felt; I suspect I'm not alone in it.