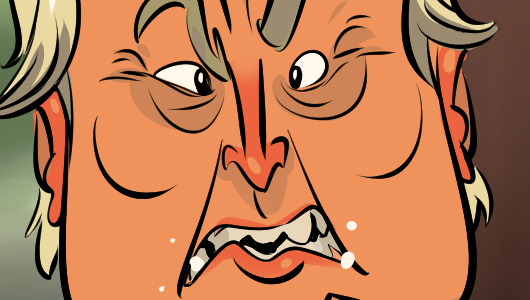 Because of where I live and what I look like, it doesn't require a lot of imagination to reverse engineer my position on what is often called "the issues." Generally speaking I don't rub your face in it because I don't know your life, and I don't assume I'm smarter than everyone else. I don't claim a right to demagogue simply because people occasionally enjoy my upmarket dick jokes. But I'm still a person who exists in an increasingly fraught rhetorical context and I make comics about my life.

So, if you're mad or whatever, understand I'm substantially more angry than you are and potentially more angry than you are even capable of being. It infuriates me that we have to talk about this again, I thought we'd rolled a boulder in front of this thing and spoken the Words Of Warding. Jack Thompson used to call Mike sometimes, and yell. Just yell and yell. He was always convinced that there was some kind of Media Conspiracy at the time, but we've never gotten on especially well with The Media. As I suggested during the events in question it was more than possible, plausible even, for a bunch of individual people to all decide they hate a stupid person simultaneously.

I think if you're gonna have a meeting about this kind of shit, and you don't talk about guns, and you don't talk about how nobody gives a fuck about these young men until they pull a trigger, I sorta have to wonder what the purpose of your meeting is. Take-Two is almost certainly there because of GTA. I'm guessing Zenimax is there because they own id Software, who made Doom. I think what you're doing is talking to everybody outside the room. And what you're saying is "carry on, carry on, just this way, until we're all rowing home on rivers of blood."