When Gabe came up with the name of the stupid show I shouted "Fuck you!" and left the office. Laura Stringer, affectionately known as Laura From Work, said in an email that "her hand slipped" and this was the result: 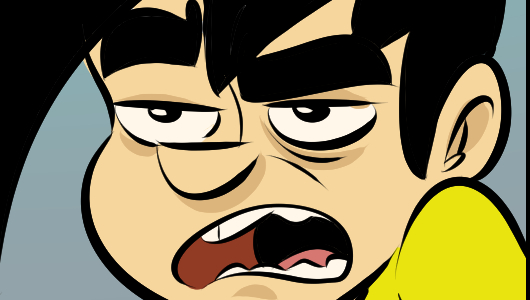 Obviously, this is something she should have a doctor look into, but wow. That's an intriguing condition.

I like a lot of Philip K. Dick's stuff, enough that I know how many Ls there are in the name without looking it up. I still look it up, just to be sure, but my initial play is always right: there is a single, somewhat nervous L with an I on each side and it feels very exposed. I've only seen a single episode of Electric Dreams, but I've had many episodes breathlessly described to me by Gabriel and they check out. There's a particularly Dick kind of fakeout, a literal Dick Move, that is all over the place here. It has a lot of interesting faces I didn't expect to see, too.

I'll talk about Steamworld Quest more on Monday, because that's what the strip is about for that day, but you might catch some Quest on our stream from 2-4pm PDT. We might dip into some Days Gone about halfway through, also, as I haven't seen anything other than a trailer or two. Oh, and their PAX East booth I guess, where they had real people playing zombies in there rattling a fence and I found it scary enough that I avoided it by several hundred feet every day after.