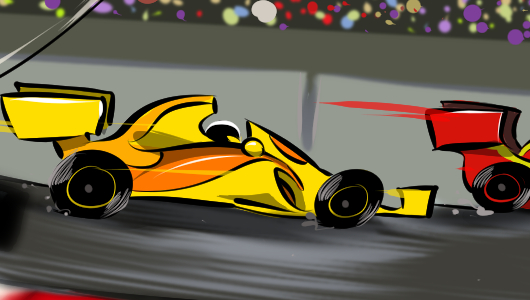 Formula 1: Drive To Survive is by a producer whose work you should just start going through and not stop until you're done. He worked on the frankly miraculous Senna, also about F1, and Amy, and Oasis: Supersonic, and Maradona - these are all films I've been trying to figure out a way to discuss in the post, but haven't been able to, so here you are. I imagine that if you're coming from outside the sport like I am, you won't believe what you're watching in Drive To Survive. I had no frame of reference for this shit.

Drawing cars has generally been considered by our Gabriel as something like his Kryptonite, but then, that was when he did not love them. Now look at this shit. He has showed me images of his car drawings privately and they are… let's say "Rubenesque." I don't know if he wants to fuck all the buses but I would like to take a look at his search history.

The story is also real, by the by - an elaboration on something we'd already discussed, various sports going digital, was always going to churn up novelty. Really, really caring about the outcome of a game is rare for me, I learn more when I lose, and the pain associated with loss is of a short duration. I'm not a good teammate for people who give a shit. So, I find stories about authentically competitive people very interesting. They're really, really weird, but they're weird about a thing - winning - that every cultural force says It's Okay To Care About. So they get enabled in it for a period of time until they're exiled, and hopefully they can put an identity back together real quick that doesn't kill them. These motherfuckers are out here doing the fucking Heroes' Journey or some shit, walking the pattern, and I'm trying to make it so the rice gets done cooking at or very near to when the rest of dinner is done. You know. That's my Everest.

There's a very interesting dynamic when it comes to Sponsorship, where there's a novel tipping point revealed that is internal to the mechanism: a hinge at which the perceived gain for cutting the Sponsored entity is greater than the Sponsorship itself. Call this "Tycho's Fulcrum," if it needs a readily accessible handle. I'd never even heard of the sponsor he lost until all this, a very robust assertion of what I already thought, which is the best kind really. Nice to get a fulcrum right out of the box and already have it calibrated.

Acquisitions Incorporated: The "C" Team hits the Twinch tonight at 4pm PDT! I'll see you there, I'll be the one in the upper left, shrouded in "darknessss."