Because of how the gears of the universe catch, pause, and clang, Morak is heading down to Australia on a solo flight. And, because we aren't allowed to overlap in any respect, this is an untenable, ghost-ridden scenario for him while it's a magic carpet ride for me. 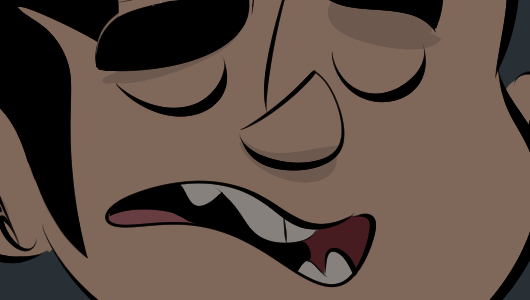 I know that people attend a PAX show on vacation, and I certainly enjoy going - even after almost a decade and a half. It gets my head right. My life is very abstract oftentimes, which has gotten me into trouble before. I spend most of my conscious hours puttering around in a kind of self-referential statuary and PAX syncs me back up to the psychological equivalent of Greenwich Mean Time (GMT).

But it's not a "vacation" in any real sense, except for PAX Aus. And the flight is long, yes. But it's probably the only time I really relax. Gabe is on a flight with Internet, and I think that would be enough to ruin it. I need to be physically displaced, forced off the grid.

We endeavored to tabulate his anxieties in a three part strip-o-thon, which I guess is what we do here generally.

Hey! If you'd like to catch the Acquisitions Incorporated: The "C" Team Halloween special we did at hashtag TwitchCon, it's here. The video might say it's a Bob Ross Paint-Along, but only in the most philosophical sense. The first hour and a half of this video is a return to The Doomgate Inn, and it's a one shot haunted house story that doesn't require that you be a fan of the show - although, if you are, you might extract more flavor.

Oh! And, yes. We have a book coming out on Wednesday. This one, specifically:

You can grab it on the store then, but we'll have that and a bunch of other rad shit in the shop at PAX Aus, and tickets are low for all days. I can't say for sure, but I suspect the price of shipping from the US and the price of a ticket are preeeety close.