When I was a kid we used to get the Sears catalog delivered to our house. This was a huge book of stuff you could buy from Sears including clothes, tools, appliances and Toys. Oh God, the toys. I used to spend hours drooling over Micro Machines, G.I. Joe figures and Ninja Turtles. There’s not really a Sears anymore but we happened to get an Amazon catalog in the mail a few weeks ago. While going through it with my 11yo son Noah we saw an ad for something called Snap Ships.

Neither of us had ever heard of them before but they looked super cool and so I ordered one of the smaller ships for us to check out. In the meantime I shared our discovery on Twitter figuring other nerds would be interested in a building toy that allowed you to create custom spaceships. It turns out some folks over at Snap Ships are Penny Arcade fans and they reached out and offered to send us some kits. When someone asks if they can send you toys you say yes, and so within a couple of days Noah and I had an armada of Snap Ships. 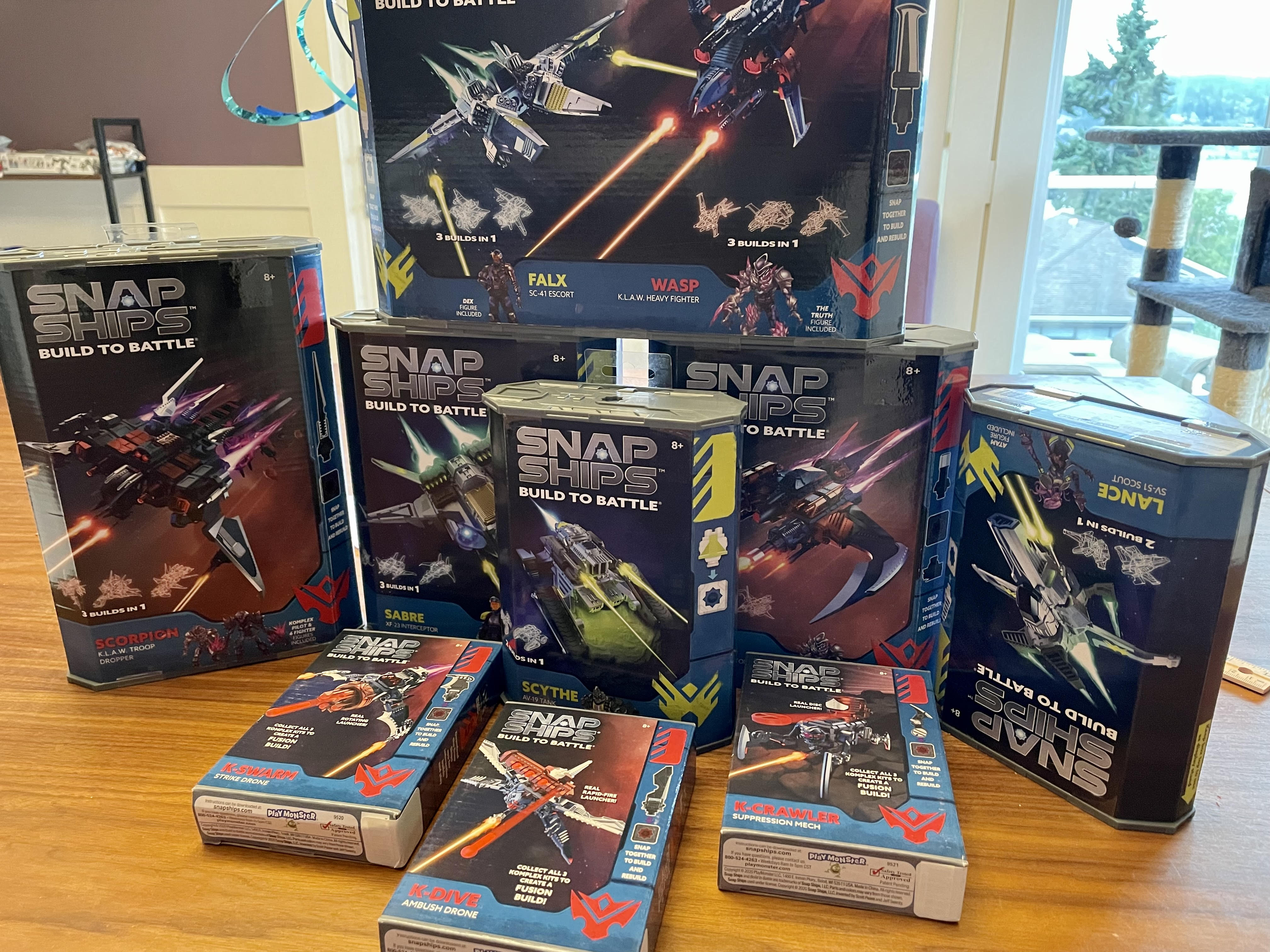 And I just noticed one of the ships is upside down. See this is why I'm not good at this influencer stuff. I apologize.

Anyway, each kit comes with a few bags of parts, an instruction booklet and usually at least one pilot. The figures are pretty small but they do have a point of articulation that lets them sit inside the cockpits. You also get a random weapon that can be attached to your ship. I thought this was an interesting feature and it was especially cool to Noah because each kit has what is essentially a secret toy inside that you need to peel a sticker off to reveal. These weapons all actually shoot a projectile of some sort as well which is fun but easy to lose. The tops of the boxes actually turn into stands for your finished models which is super clever and Noah really likes displaying his current favorite builds on his shelf. 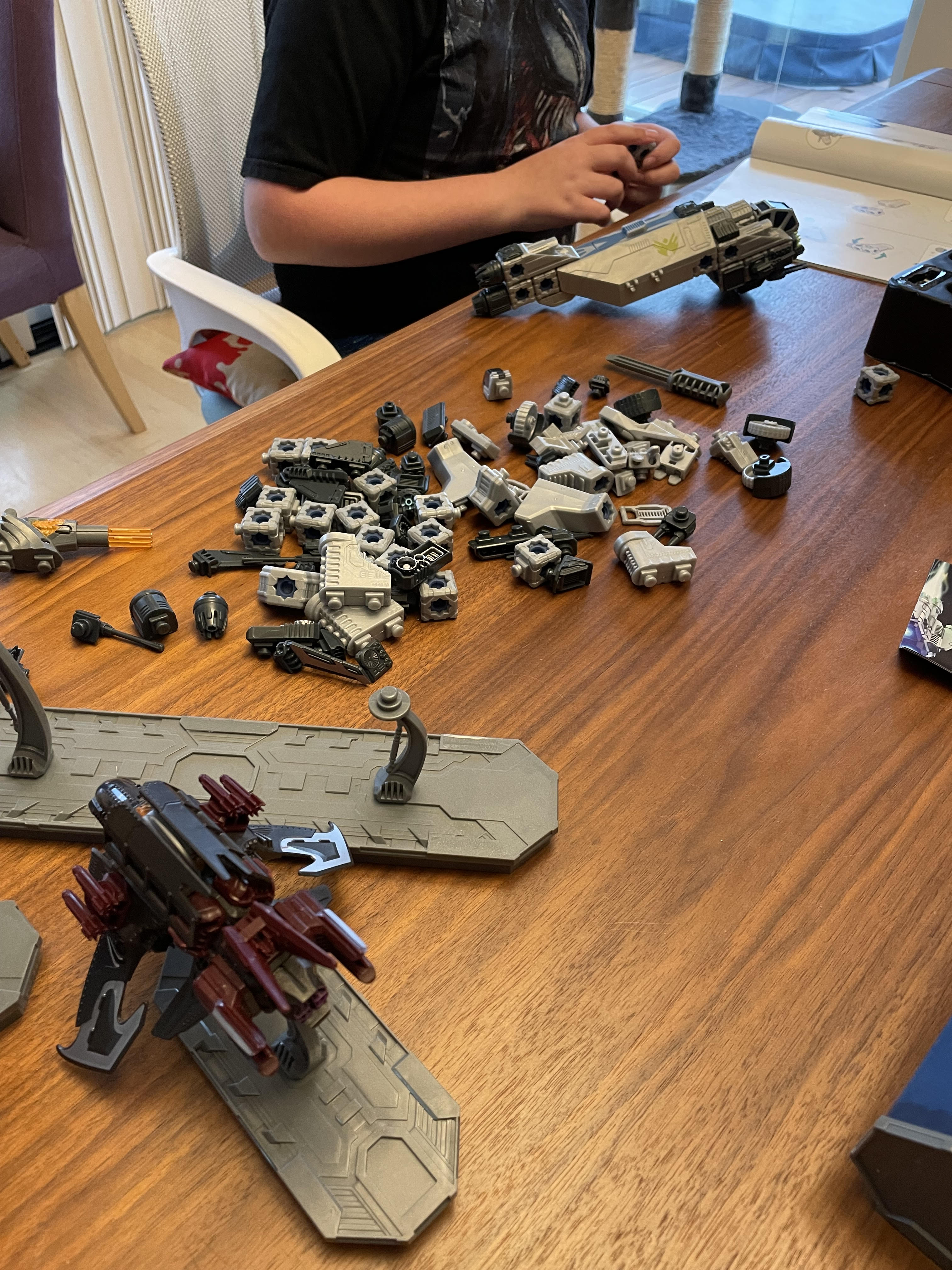 Another cool feature is that inside each instruction booklet you will find multiple builds. One kit might offer builds using all the same parts for a scout ship or a fighter. The larger kits can have a few different builds and in watching Noah play with the kits I noticed that these ships got taken apart a lot. He built each of the builds in the instruction booklet and then would go back and build his favorite design. Once he had a couple kits he also started making his own ships pretty much right away. Here is a Noah Original: 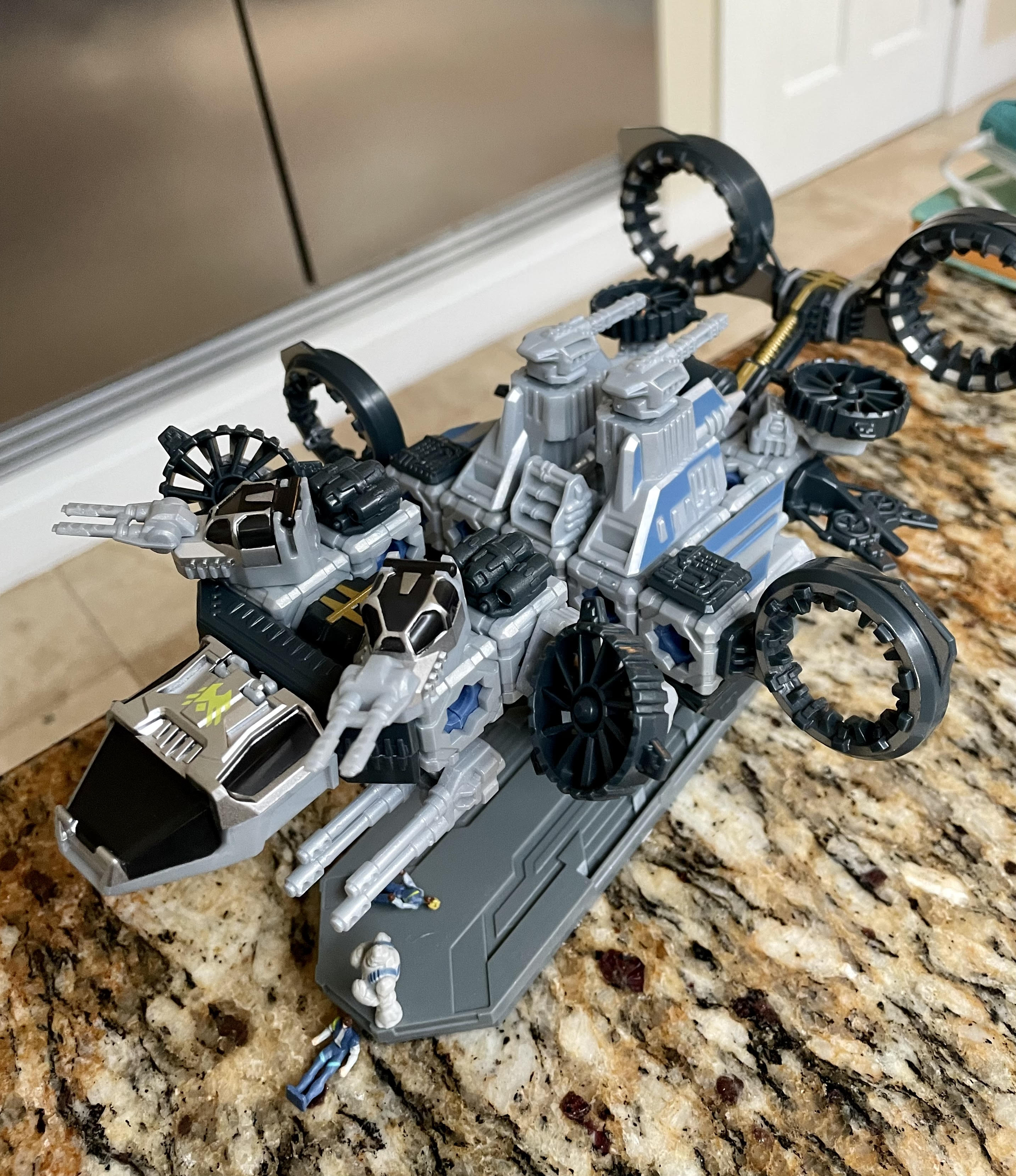 The selection of bits and pieces here are really what makes building these ships so much fun. It almost feels like you're playing the ship creation section of some space shooter video game. There are chunky cube shaped pieces that you can use to build up the frame of your ship but then you also get tons of little detail pieces like vents and turrets. It’s all the little custom details like fins, thrusters, and cockpits that really make it feel like a videogame to me. Someone has taken the time to curate a selection of easy to combine chunks of space ships and no matter how you slap them together you will probably get something cool.

There’s also an app and an animated show that introduces kids to the setting. I can tell you Noah didn’t need any backstory to start playing with these immediately. They also have something called Snap Ships Tactics in the works which from what I understand is a set of rules that will let you have tabletop battles with your custom builds. In fact I think they will be at PAX unplugged showing it off. Combine that with their recently announced line of Mechs and you certainly have my attention!