The first episode of The Book of Boba Fett was fine, but - like The Mandalorian - the first two episodes combine into the Actual Thing and now I'm in. This is pretty fun. It also seems like the people making it think Star Wars is kind of cool and don't feel ashamed of that, but they aren't so enthralled by it that they won't explore the margins of it and contribute. Dream job shit. 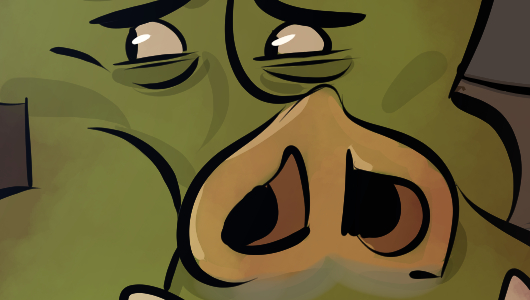 If you read Star Wars novels as a shrieking larva, you've always held a little faith that you'd see this show happen. It's still a little surprising that it has! I don't want to go into any particulars in case you haven't seen it, but there's some shit in this second chapter that is such a succor to the people who kept this setting alive. I think Boba Fett has potential, but it's the embroidery around him in this episode that really has hold of me. Ultimately though, what allowed him to escape the Great Pit of Carkoon was not martial prowess or unwavering mental strength but something a bit more cosmic.

I was out with Dabe last night, and it was then that we hatched the plan to play Storybook Brawl on stream. The truth is, we have been streaming it, but he just streams it to me over Discord and we talk over the plays. Well, now we're going to do that with our transmit beam pointed outwards. He's gonna start at ten a.m. Pacific, I'll wrap up the strip writing with Mork as soon as I can and join him on stream.