I got the in-flight Internet thing to take my mind off this lady next to me on the plane. Between incredibly productive coughs, she either

- Blows her nose into the same, singular tissue she's been blowing into for the last four hours and then literally gazes meaningfully at her fucking snot, like some tubercular haruspex, or 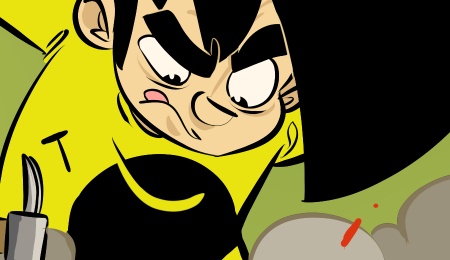 But then I saw that the strip had been posted, and I was like, shit. Did I fuck up the date in the backend? I better get hold of our Technomancer. Dear reader, would you believe that it is Monday? I hope so, because it absolutely is. I changed my flight to the earlier one, but the rest of the psychological machinery hadn't received the new firmware. I am more than happy to speak to you from my phone, with my thumbs, from the sky.

I almost never leave Seattle, it is quite rare, and for some reason I have like four packages at home - only one of which is is the thoroughly intact and hopefully not Gabe'd Playdate. I plan to use the device medicinally this week.

As for PAX East, it - like Unplugged a few months ago - felt like PAX. In a way that is a little difficult, frankly, to manage emotionally. Unplugged is the baby of the family and so even a big Unplugged is not on the scale of an Aus, West, or East. I guess I didn't entirely know how much I needed something like this to happen. In this era, indie games rule the roost and I have a lot to talk about in the post this week as a result. It was also really cool to meet somebody who you want to keep talking to, and be like… hey, do you want to come over to this fuckin' New Belgium Voodoo Ranger bar that exists somehow, and try one of the beers we made with them? I was there every day and literally every drop they brought of it is gone. That line virtually defines the IPA style in this country, and improbably, depending on where you live, you can even order our FOESLAYER Collab and have it delivered to your house. How is this my life? Well, I know why: because you let me have it, which obviously I appreciate. But things have been so scary for so long that it's been hard for me to feel it when something good happens. Usually. Not this time. This time it has penetrated the scalp, like Selsun Blue.

We've been sitting on our Space theme for a bit now, and the chance to unleash it finally feels like such a triumph. There is a ton of cleverness in this outing. Our designers live to make rad shit that treats the space we share as it deserves to be treated. To that end, I want to make sure you know that their PAX East 2022 Collection is available online until 11:59pm, April 28th - but I wouldn't wait. A couple items have already been descended on by attendees already and utterly devoured.

is the sock on her foot still? Is she like reaching down and plucking candy out of her socks or does she have a special candy sock that she is holding?

She was pulling them out of a sock on her tray. I guess they could have have been Skittles also, but I'm not sure that improves anything.