It's all true, of course. I can imagine that if I took myself very seriously, this kind of thing would fuck me up. But I mostly think it is funny because it is funny. Mike laughed and laughed. I just told him because I thought he would like the story, but it absolutely works as a comic. 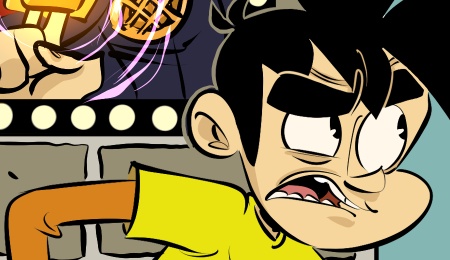 We were familiar with Biggie's Ten Crack Commandments - with the sampled assist from Chuck D - before we even started this shit. Our lives are not constructed in such a way as to make the lion's share of its edicts actionable. But Number Four - Never Get High On Your Own Supply, bolstered in the mind by the internal rhyme - that's the cornerstone. I have a very high opinion of the people I work with, and I am more than happy to deflect compliments to them. I mostly think I'm lucky, and it's sorta hard to take credit for that by definition. I'm superstitious enough to think any success I've had is because I try to tip well.

At different times, I have been Tycho Brahe, Omin Dran, or even one of The Creators from Strip Search. This last one is especially noteworthy, because the whole idea of The Creators is a joke about the type of person I have no interest in being.

If that part is mostly over, I'm glad. I'm happy for that portion to fall into the atmosphere and burn away. Notoriety is only useful insofar as it enables something else - by itself, it just warps the mind. Dumb monkey brain only know what it see, hear. Once you start thinking about yourself as a function of others' perceptions, once you start thinking about what you deserve from others, it's easy to become someone who… well, you've seen them. And when it evaporates, as everything does, it's probably worth having an identity that can survive the void.