Tavis Maiden (Tenko King, Binwin's Minions, Stranger Danger, Strip Search, Probably Other Stuff) is taking a turn with The Lookouts with "The Wolf" for a few days. Let's tune in. 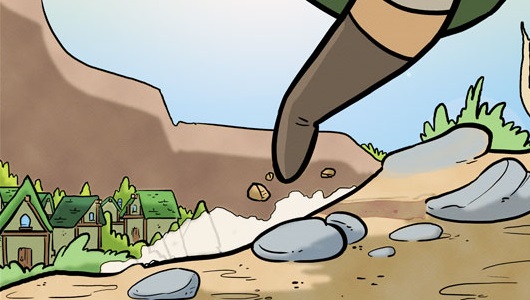 So it turns out that I'm the only one of my friends over here that likes the new Halo. Call of Duty, with its orca-smooth progression and relentless shooty-shoots, has served as the lingua franca between those of us who are Halo and Destiny players. Though I'm fairly certain Gabriel just plays Destiny before we play CoD. And maybe after.

Gabriel has mentioned the "leaver" problem in Arena, which more or less ruined the game for him. He sent me shots of the leaderboard from his phone where he was the only member of his team with text beneath them saying things like "no more." Leaving needs to be brutally punished and staying needs to be rewarded more substantially. This isn't optional; it's existential. He never really found purchase in Warzone; we were always smashed mercilessly in the pre-release period, and no Warzone seeds were allowed to germinate. I found the rhythm of the game on my own, just before I left for PAX Aus - when to use cards for maximum effect, to use more subterfuge on the point and less teenaged backseat fumbling, that kind of thing. There is a game there, and it may even be Halo, but that canon is resilient. As I suggested before, a cornerstone of Halo (which is to say, a cornerstone of classic shooters) is that they are about skill, yes, and knowledge, but they're also about resources: weapons and vehicles spawning on timers which shape game flow. If you can get a rocket launcher from a vending machine, can we agree that this alters shit at the root level?

REQ Packs are essentially the game's ongoing funding method; packs contain a handful of single use items and (depending on the quality of the pack) some permanent items. It's all well and good for "maps to be free," I think this is an interesting turn that a couple high profile games are taking, but if the maps they're incentivized to give away for free are those which generate the purchase of REQ Packs, and REQ Packs are primarily for Warzone players, it's created a kind of funnel that channels my enthusiasm downward.

But then the newest update from 343 - in which it refers with specificity to a "November Update" for the game, which sounds suspiciously like a schedule - shows a bunch of new cards and details the return of Big Team Battle, but with Forge maps. I'm trying to figure out if I care that these are Forge maps and not purpose built. I'll have to play them to know.

I like the game because it's the most legible, most predictable, and therefore most real of the big shooters. Kiko says it's always been like that, and that he's done it already. He liked the ability to customize his loadout and use special powers. He's mad. But I've never actually been good at it before. I've never even been passable at it before. After playing Destiny night after night for months, I… am not good, perhaps, in the classic sense. But I see the arc, and my coordinate on it. And I know what to do. So it would be cool if they came along with me, but I don't need them to.

I think that we've been trained to expect it to go "ROWN DOWN DOWNT, BA DOW DOWNT" when we "gain a level" and that we should be "gaining levels" and unlocking things and there should be drops. People have always referred to modern RPG mechanics, wherever they're seen, as Skinner Boxes - mostly ironically, occasionally literally, and the comparison is apt. But if it is a Skinner Box, Skinner Boxes are designed to alter behavior. And I think they have done so. This means that a game can be excellent, but if it does not have... I don't know what the metaphor would be. If it doesn't have swaying plumage, it's not going to provide the same brain chemicals. I could decide to feel this way or that way about it, but it's simply true. Gabriel would call Halo "dated," and I might call it "vintage," but it doesn't matter - not really. It is not a creature of this age.

Oh! And this isn't about Halo, but reading this page was the first time I ever had a drink in my mouth and laughed so hard I choked on it and then threw up. Specifically, it was the one called "Die And Learn." I'm just marking the occasion. I need to go get some paper towels.