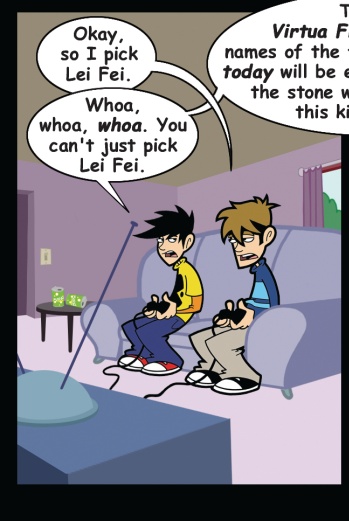 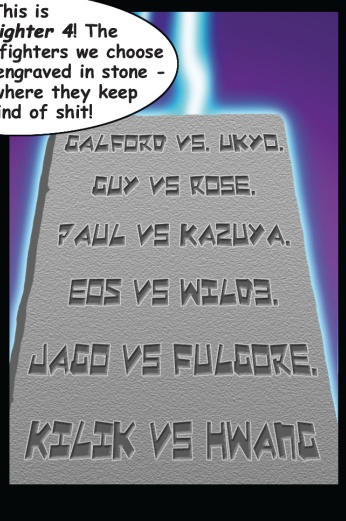 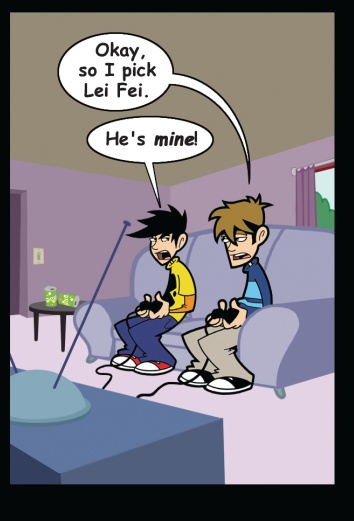 The last couple weeks on this site have been really screwed up on the network tip. I could talk about stupid router crap for the whole post, and wouldn't that be fun, but I'm afraid I'll jinx it if I go into it. I'm not even going to say it's fixed - I'm just going to go about my business, router, and if you want to service my packets, well, I think we're all very grateful.

Today's strip deals with Virtua Fighter 4 tangentially, but its primary focus is the selection of characters. Maybe when you go pro (or something) you're like some kind of Renaissance Fighter Man, and you can kick ass irrespective of the foot you kick it with. For the casual to moderate player, I'm sure that the process we describe here is of crucial significance - especially when I end up with this kick-ass monk guy and Gabe ends up with a veterinary assistant or some shit. The Stone of the Ages (featured in Panel 2) catalogs six of our selections from previous games, from the obvious to the sort of obscure. Recalling the games in question can be thought of as this afternoon's quiet activity.

Virtua Fighter 4 is marvelous. It's intricate. More talented people have said so for more pages than I'm interested in producing myself. When I look at what makes this game up - moves, counters, reversals, stances, and whatnot - it's like I can trace back, through these decisions, into synapses, and see a portion of its creator's cleverness laid bare. The parameters, the hard laws that establish each experience. The immoral, illicit exceptions to those rules. The intangible quality, inspiration, that creates a system wide enough to contain innumerable creative interpretations - i.e., play. It's something I think about quite a lot, so you'd think I might be better able to articulate it.

I don't even know where to start. The real issue is that I've played some really intriguing games recently, the last two days let's say, and it's really energized me about the passtime in general. I think I'll lead off with Gunvalkyrie.

You might recall my chagrin at seeing Gunvalkyrie reamed in an early review. Since I'm betting that the IGN review I posted on Wednesday was actually Insider, let me hook you up with this review from MyGamer.com to counter the initial buzz I quoted. I'll weigh in on the issue myself: I can understand why a man (or woman, or giraffe) would tear the Gunvalkyrie DVD out of their system in frustration and savage it with a pair of wire cutters or perhaps some other, less-specialized type of cutter. It's their loss - good luck trying to play it after that. Yes, this is one of the hardest games I've played in recent memory, and not just because there appears to be a surplus of alien spiders. As an index of its difficulty, it is like a drill sergeant compared to the invertebrates that share it's shelf. For those of you just joining the gaming community, Gunvalkyrie is a sci-fi action/platform game with extremely demanding controls and sensibilities that might be more at home in a mid-eighties arcade. I glory in this game. It feels like a Berserk or Robotron for the new millennium. It's the game you would have begged your mom for a quarter to play, back in the day. It's possible you asked for two up front. You know perfectly well that she's in the checkout line, and even though getting those quarters was contingent upon your assistance in a grocery-related context, you are weighing the fate of the world against a sack of vegetables - and you are making the obvious choice.

Not sure if you've played the Freedom Force demo. I was going to take a pass on this one initially - maybe change my demo policy altogether, after playing the Renegade demo which actually did a disservice to the full product. That policy lasted about five minutes. For the love of God, you need to get this installed. Play through it. Tell me that's not great. Tell me that the people who made it aren't completely, totally, absolutely batshit about their game. I make a tight fist just thinking about these reviewer-types, with their berets, and their stupid, playing it right now. I hope they get by a truck that is hauling other trucks.

Yeah, so I like Boston. I hope that's not going to be a problem.

the sun was gone