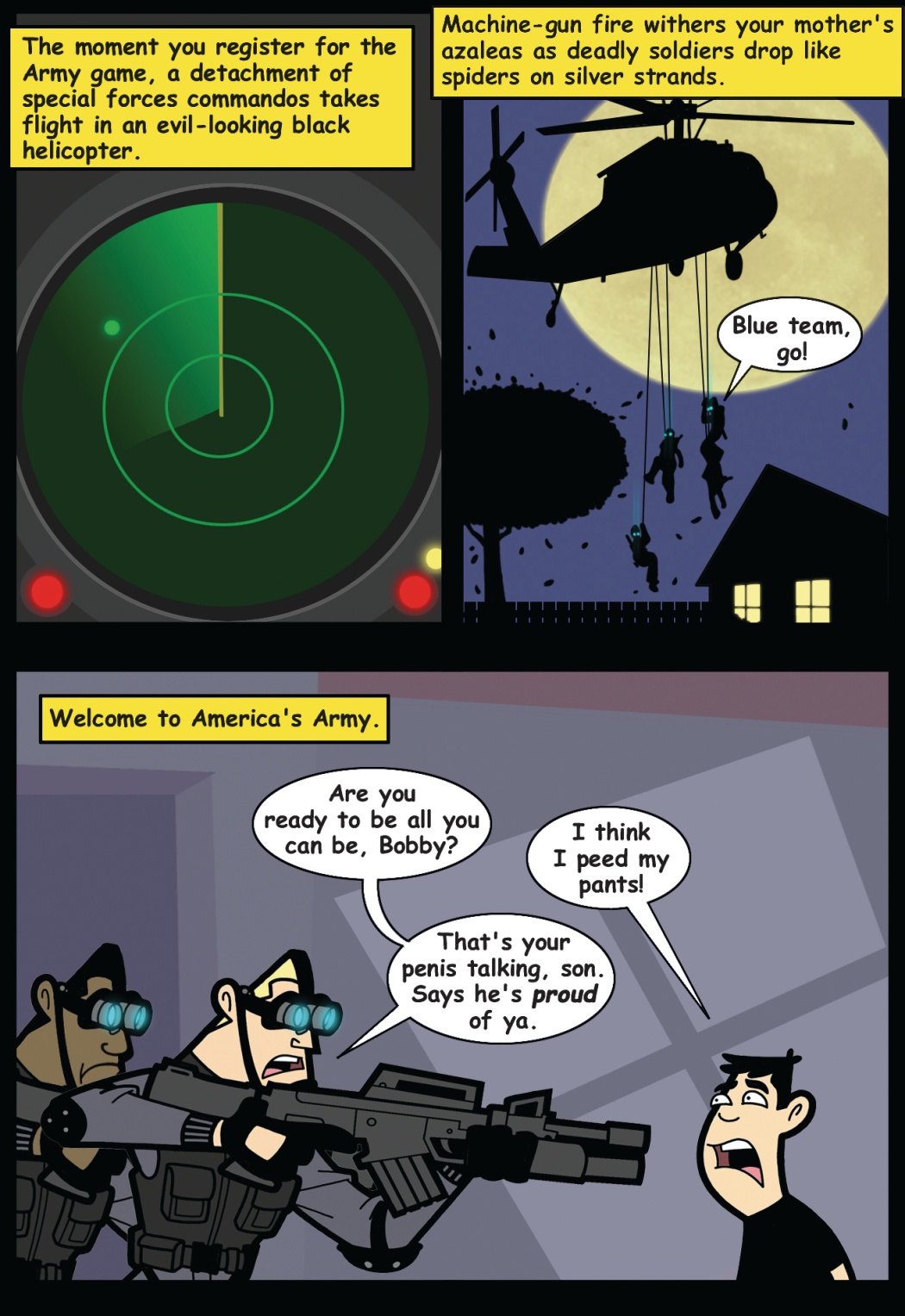 These America's Army games really seem to enrage some people. I have it under good authority that Brenna's not crazy about them either. That's fine, you can all be wrong together.

We did a comic about some of these fears that should be fairly accessible no matter where you land philosophically on the issue. You've either got ridiculous caricatures inside the strip to enjoy, or you can (like ourselves) see the fervor about the whole thing as ridiculous to begin with.

Oh, they must be bad, then! Propaganda is a loaded term. It's fun to bandy about, don't get me wrong, but it obscures reasonable dialog. Can we use the modern word "advertising," please? I only ask because it's more accurate, and less incendiary.

It cost seven million dollars (source) to make it. That's a lot of money.

Maybe to you, or me, or Bob it is, but these fuckers lose forty-three times that much money in the couch. Where did it go? Nobody knows. Outer Space. If it helps you, just imagine that's seven mil that isn't being transformed (via some dark process) into bombs or guns something that fire comes out of.

But they are buying weapons with it - weapons in a battle for young minds!

Are you this dramatic when you buy a gallon of milk? Because I'd like to see that. You're not being rational. The market is up to its ass in military themes. The fact that this one is "free" or "authentic" just ends up bullet points on some feature list to gamers, a great percentage of whom have very firm opinions about their hobby. We've been pretending to be soldiers all our lives, in one way or another, in the woods or at ten twenty-four by seven sixty-eight. Wanna stick it to the man? Download it, play it, and then don't join the military. It'll be like installing Linux on your Xbox, man. I'm talking about some hardcore shit.

If you're worried about America's Army hurling youngsters into lives of military service, there are a couple points I'd like to make. For one, if games are as efficient at "snaring the young" and "committing them to life choices" as you seem to fear, just think how much worse it could be. I mean, shit, nobody in the Army runs around with fake fangs, hanging out with a cape on in the park. Count your Goddamn blessings. For two, thank Christ on the cross these pitiful creatures fell victim to an organization that will feed and clothe them, because a young adult who consults videogames as some kind of elaborate day-planner is in desperate need of guidance.

Whenever someone starts talking about The Military-Industrial Complex, it's like a switch gets thrown in my head and then I hear only music. I don't find arguments that seem memorized particularly evocative. Oratories that stem from an absolute, fundamental, all-purpose hatred of the military as a concept - without any reasonable concession to its modern necessity - strike me as intellectual preening. I'd like very much to hear why the America's Army games are dangerous and other games are not.