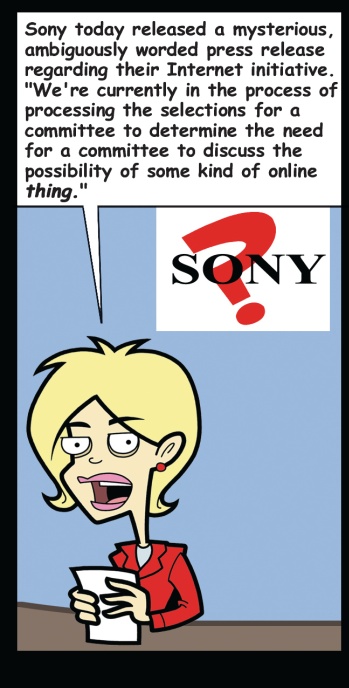 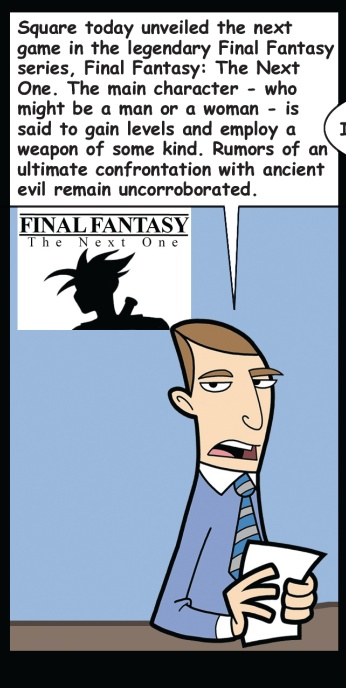 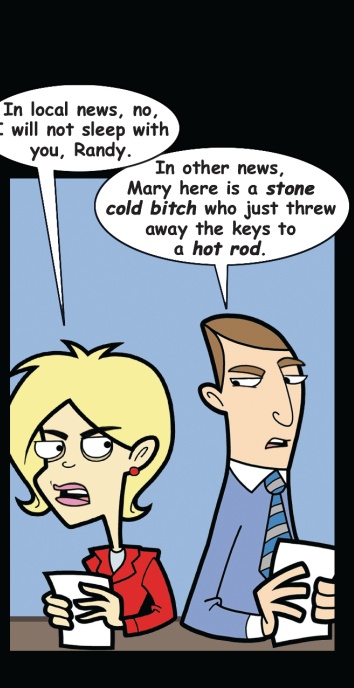 Shit, sorry guys. I finished the post, and then I didn't bother uploading it.

Finding actual news wanting, we decided to run with a few safe predictions. And some sexual innuendo. Which we thought couldn't hurt.

I have a cool E3 story to tell you, but you have to promise not to tell anyone else. Deal? Deal.

The expo is pretty warmed-over by the third day of the show proper. You've probably already seen everything the first two days, which is why we do the "Come and meet us for whatever reason" thing then - honestly, there's nothing else to do. The people who are running the booths are so exhausted by this point that I hardly blame them for being surly or not wanting to have their sexy picture taken with some greasy dork. So, Gabe's in line to meet Bruce Campbell, and I'm hanging out with Monkey, Batjew, Kiko, and Pork. No, not the meat. Regardless, I believe that Porkfry used to test stuff at Humongous, and some people he knew were running booths, so we went up to meet them. They seemed nice enough, didn't bite, hello Peggy, but it turns out they wanted to show me something.

If I had to distill the Tycho persona into a single definable characteristic, it is that I like to be shown things.

The place is dead, it's not like anybody is going to see it when Backyard Hockey gets closed down, and some new game - a game called Moonbase Commander - pops up in its place. As soon as I see it, I'm snared. I mean, I have to look at it for about ten seconds before I understand the entire concept, at about the thirtieth second I'm starting to understand the ramifications of those concepts, and somewhere about a minute I want to stick a pen through the man's temple and clutch the keyboard to my breast.

Think of territory battle games like Risk or Axis and Allies - mixed equal parts with classic Scorched Earth/Artillery-type firing - and you will be very close to being close to getting it. Operating from a central hub, each player invests their turn's energy in surveillance, resource collection, expansion, or assault. That's it. There are a total of eighteen different abilities to use each turn, and each costs varying amounts of energy. The implications of these eighteen unique tools are staggering, though - force shields, anti-air modules, crawling bombs and viruses to ravage enemy systems represent just a sample - and I guarantee you will be delighted with the mischief you cause. Eighteen didn't seem like a lot to me when I was first playing, but now I think other games simply have too many things. So nyah.

Take a look at these screenshots, but be careful not to read the insane ad copy at the top, penned as it is by the mad arab Abdul al-Hazred. See, the game is coming out via Humongous, who brought us Freddi Fish, Putt-Putt, that kind of stuff. I'm not harshing them for it, I'm just stating facts. If the game gets pushed as a Strategy Game With Training Wheels, so be it, but that's a mischaracterization. What it actually is is some kind of holy fucking grail, accessible, yet possessed of tactical wealth. It's a challenge, though, and I recognize the quandary - how do you promote something that is such a simple pleasure, without making it sound simplistic, designed for children, or for idiots who can't somehow grapple a "real" game?

They sent me the latest build a couple days ago, which made the AI cunning beyond my most sweat-drenched fever dreams of cunning. I think about this game when I'm playing other games, and I've as much as dedicated my life to advocating it. A couple weeks after the game comes out - and it comes out very soon - we'll be holding the Penny Arcade Invitational, a 2v2, single elimination tournament where Monkey and I kick the living shit out of you and your best friend. The game records demos, tiny ones, and the entire tournament will be available for viewers in a single zip file. The prize, whatever it is, will be enviable - you may sure of it. Monkey and I will put it up on our cams when you don't win.

Somebody said they hadn't seen Brenna's ravens yet, so I put them back up on mein kam. Again, we do ask that not paw hungrily at yourself while looking at pictures of my wife.

I'm finding myself doing a 180 degree turn on the issue of games affecting behaviour. For example, ever since the AvP2 patch that added the Queen in multiplayer, I've been completely unable to stop laying hideous eggs - pausing only briefly to hiss at Ripley.

shut up and buy