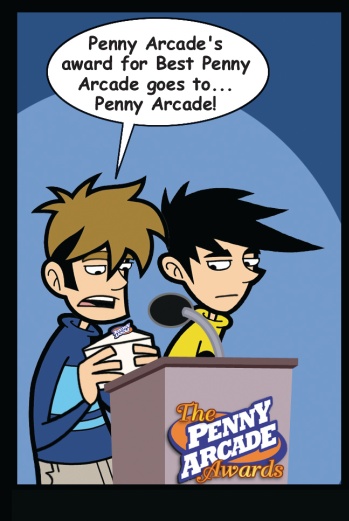 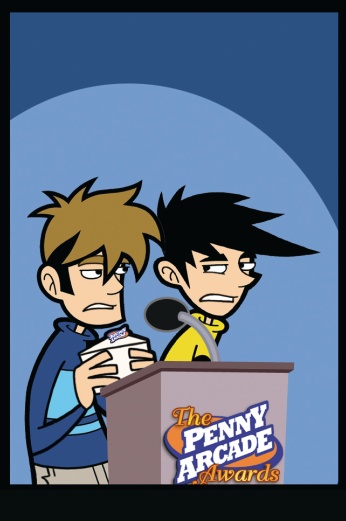 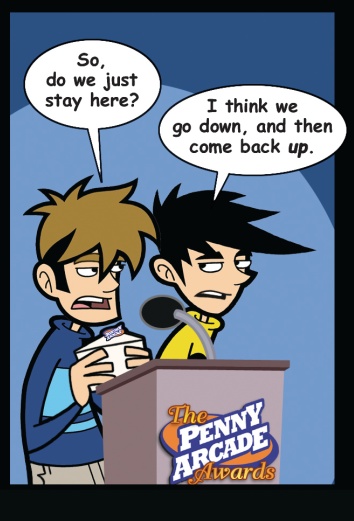 The very moment winners were been announced at the Cartoonist's Choice Awards, we immediately regretted having rejected our nominations. Then we remembered that, wait, we were Cartoonists, right? Why couldn't we Choose? An award, I mean?

The more I think about whether Warcraft III is a worthy successor the less I care if it is or not. The unit limits that keep everything skirmishy are very much to my liking, I prefer it for real-time games, but it's clear that's going to be a sticking point for many people - as far as I'm concerned, Warcraft is dead, long live Warcraft. I've never been happier with it, especially since they've dropped the pretense and virtually made a Warhammer Fantasy RTS. I don't need to go into the particulars, like I was going to - you either know what I'm talking about or don't care. Either way, let's evolve this shit. Blizzard, listen up. You have the license and the power to do this. Warcraft Legions. Stay with me, here. I'm talking about Turn-Based strategy. Since Games Workshop is making some kind of Massively Multiplayer thing with their tabletop wargame, you might as well swoop in and eat their lunch.

Come on! I know you've got it in you! Balance armies online with the resource system you have in place, or try a "slots" system, akin to the inventory in your Diablo games, where units of differing potency take up more virtual "room." You could also use a point system as Warhammer or Bungie's brilliant Myth did, I could honestly care less - that's really not the focus. Utilize a "shot clock" to keep the pace up, like Moonbase Commander. Move Turn-Based combat forward by allowing the group selections, teaming, and powerful interfaces that have been pioneered in RTS. Add gigantic units, strange and wond'rous to behold, devices that could never be balanced properly in real time but could serve a host of fascinating functions. Warcraft III is largely the correct technology already, and the ability to construct compelling battlegrounds is a perfect fit for Warhammer fans, for whom terrain is a critical part of the experience. Create unique win conditions and cooperative multiplayer experiences that go beyond existing (God help me) paradigms. Anybody could do it, but you could do it right.

Human beings frequently write in with interesting commentary on x, where x equals the things we have on the site. Ordinarily I secret these rare moments of personal interaction away and appreciate them at my leisure, but I thought you might enjoy a couple of these recent ones. I commented Monday last how the world seemed to be constructed of tiny OICWs, suggesting that this terrible weapon would ignite Armageddon. Interesting mails from a Marine in support of it and Joe Rusek taking the con side decorated my mind's foyer. On Friday's spiders, goats, and horrors from the lab discussion, one Deborah Lonrau wrote in to soothe my fears, and maybe yours.

So, Monkey and I are up in our local E to the B, trying to get some credit for shit, when I see a bunch of games I've never heard of before all released and on the cheap. What the fuck is Zoocube? How about Rock Manager, which seems really intriguing, thanks a lot Sweden? Or Hero X, which I had heard about, but I had no idea it was out already? The last two I mentioned there are twenty bucks per, so it's not like it would take some big investment to find out, but between Neverwinter, Warcraft, and Army: Operations I don't have the time even at a price that sweet. Yeah, I know Army: Ops was pretty rough out the gate. I'll talk about it Wednesday if they haven't figured it out by then.

the creatures jumped the barricades