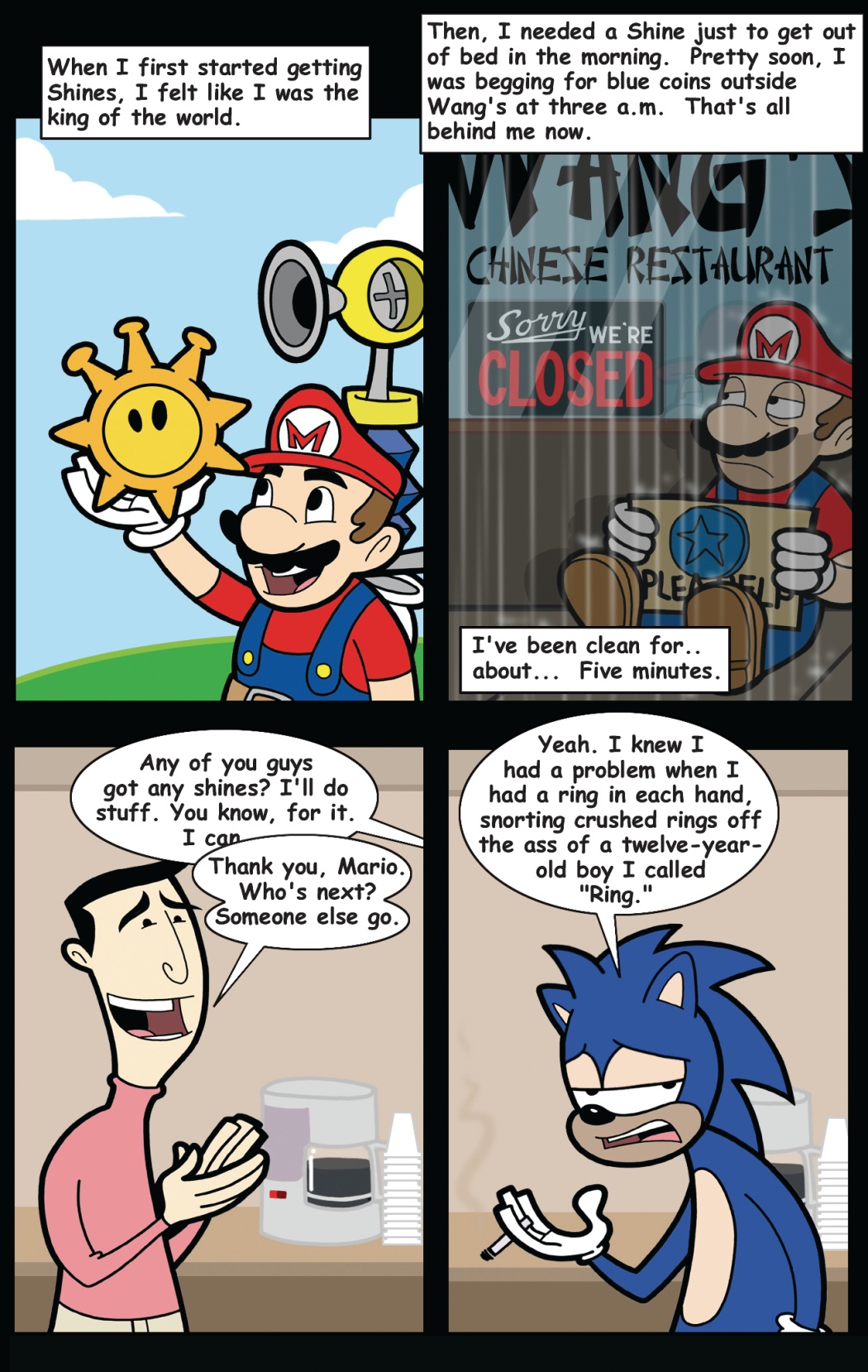 We've been playing Super Mario Sunshine ever since we imported it, but its general release seemed like something to celebrate with a strip. You can get a shine every now and then, socially, and still lead a healthy, active life. It's when getting shines (or "shine-getting") takes over and you lose control that you slip into a place you may need help getting out of. Won't you call us? We're here for you.

I keep trying to remember why I thought this month was going to be worthless game-wise. This was at the beginning of the month, so it was before I got sick and started making prescription smoothies that combine cough syrup, fresh fruit, and Sudafed I smash with a rock. I'm sipping one of these sonsabitches right now and I feel like I'm sitting on a fucking beach. It must have been the cons or something, couldn't see past 'em, who knows what, because Electronics Boutique practically mugged me last time I went in. I don't even know what the hell happened. I went in to see if they had The Thing, and came to in the alley out back with Dead to Rights and Soccer Slam for the Xbox. Dead to Rights is a gritty, Hong Kong style action game whose reviewers seem so conflicted about it that I just want to suggest another line of work. Despite our best efforts to laud it, we heard Soccer Slam didn't do all that well sales-wise - which is why Xbox and Playstation 2 releases don't seem to follow logically. Maybe our news on its performance was wrong, which would bring me joy. Taking three players through the Quest mode, earning money and upgrading our characters was some of the best gaming to be had this year. Go Blackbox, I guess. If I were EA, I would buy you, too.

Kara told Gabe to get Super Monkey Ball 2, Goddamit, and that's what he did - you'll probably hear more from us once we unlock the new minigames. So, already we're into those bastards for three titles. Today, Onimusha 2 - I've seen some middling reviews, but I love samurai. SOCOM: Navy Seals is also here, which - more than just a game - arguably kicks off the PS2's online bid. Of course, then you need the PS2 network adapter... Mafia is out for PC, haven't seen anything yet, but I have a Mob fixation at the moment so anything with a Thompson gets top marks. Maybe Buffy's good. NFL2k3 supports Xbox Live, so now I think I'll need that. Jesus!

I have this thing I do when I'm poring over screenshots for some new game - I tend to focus on interface shots. I'm of the opinion that an interface shot is worth about a gillion other kinds of shots, because it's the only type that even approximates gameplay. They're the only shots of the game, as such. It's not that I don't appreciate ocular candy for its own attractive sake, but it doesn't communicate anything to me. So, when I see a shot like this, let's say, from a game called Soldiers of Anarchy that I will admit to you does not ring a bell, I get pretty excited. So, we're talking about easily customizable vehicles, in a strategy game set at an interesting scale? Okay, now you've got my attention. I'm interested in your opinions, and would like to subscribe to your newsletter. Demo just came out today, let's give it a try if we can and talk about it on Friday.

I usually have a pretty schmancy wallpaper, so transparency features - like the ones built into Trillian message windows - really, really do it for me. I was fucking around over at Phong this morning when I should have been talking to you, my apologies, but he mentioned a utility that gives you the transparent taskbar straight out of my secret longings.

to study poetry at evergreen