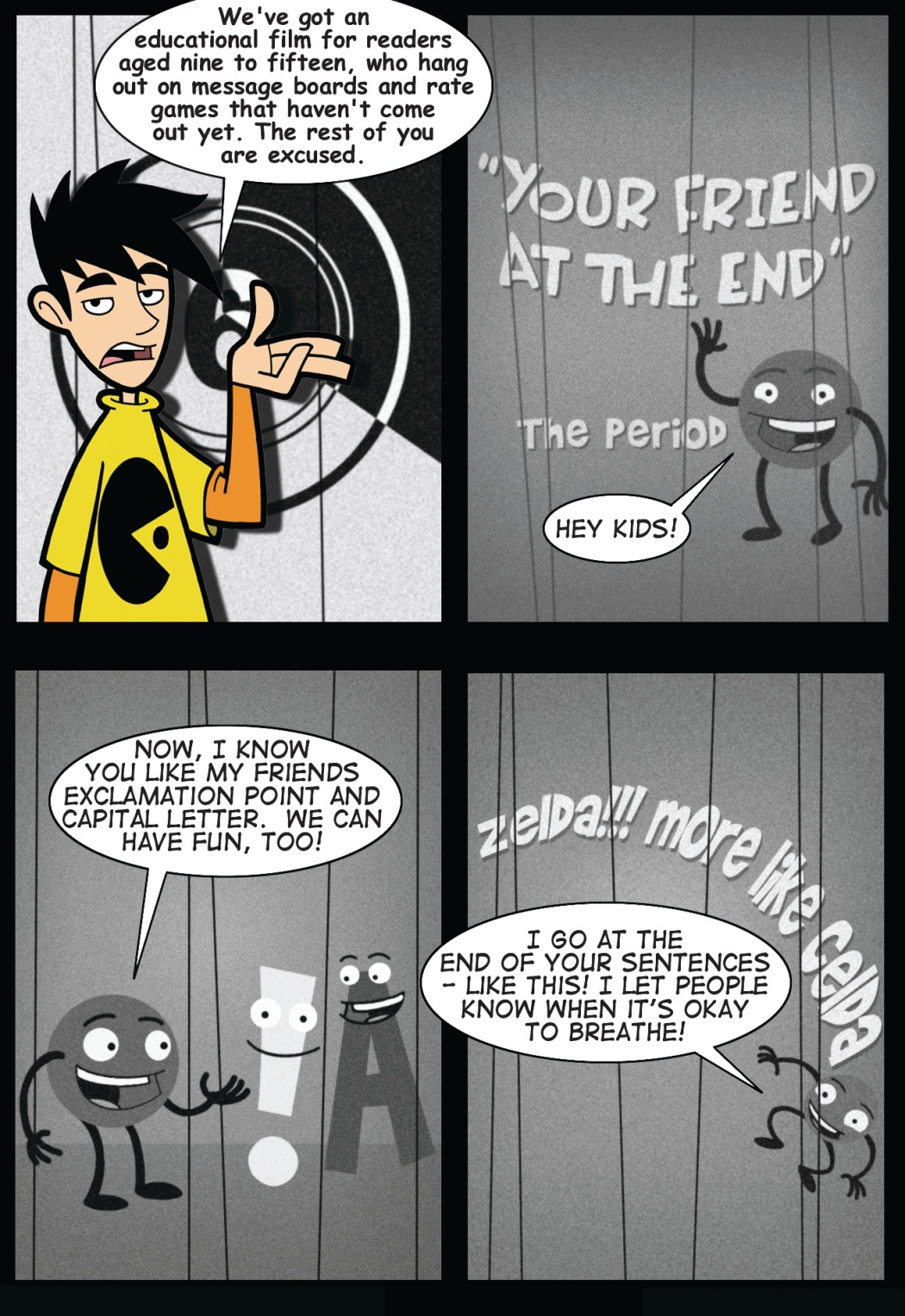 I cannot wholly express to you how much we enjoy the "reader review" sections of websites like Gamers.com or EBWorld, but do let me say that they yield a delicious flavor, like the pulp of ripe fruit.

It's like going to the zoo. In any event, we thought we might do our part to elevate the humble stature of the Period among the youth. The trouble is that I like Gabriel's renditions of Period, Capital Letter, and Exclamation Point so very, very much that I no longer have any interest in Penny Arcade otherwise. I love The Period so much (in fact) that I am determined to produce a line of Period urban wear, and so adorned I shall bump with great frequency throughout hoods.

I got caught up in a project on Wednesday - that's what I call Dynasty Tactics now, a project - so I wasn't able to go into Over Easy like I might have wanted to. No time like the present, I suppose.

The date stamp on the original piece of Over Easy art is December 30th, 1999 - roughly one year after we began Penny Arcade, and only a week or so after we'd completed our Christmas Carol. We do not regularly work in what we call "the long form," so the production of even those six holiday pages was outside our experience. I often joke about how loathsome or how grotesque continuity is, but the reason we tend not to swing like that is because we get bored very easily. We don't like being tied to any concept for very long, because we know it is only a matter of time before we would do anything to get out of it. There are times, however, when we are gripped by a concept, held firm, trapped is another word, and there's nothing for it but to just do it.

The next project of this type we would actually complete was The Fall Of The House Of Brahe, which we enjoyed very much - but that certainly wasn't the next idea we'd had. The date stamp proves it. Gabriel dreamt that we made a Hong Kong action homage, so I named it "Over Easy" (clearly a take on Woo's Hard-Boiled), and we imagined that we were going to start on it immediately. In an alternate universe, we did.

I don't think we ever stopped being excited about the prospect, but we started to have these weird legal issues that I'm not terribly interested in discussing with any specificity. I would, however, like to communicate something very important to those readers who do creative work of any kind, and I use creative in a sense so broad that it includes the production of a sandwich. You do need a lawyer, and you don't know shit about contracts. I know you might think you do, because you're so fucking smart and everything. People who write contracts are operating on a level that you can't even imagine, and just because you know all the words they're using doesn't mean you understand their ramifications when they're all put a certain way. These people make traps out of words, not just metaphorical traps but real-ass, Goddamned traps that can cinch around you and steal your work and make you never want to write another word so long as you draw breath.

So, here's the deal. We'll make a page or two of it each month, and anyone who has paid Club dues that month gets it in their e-mail. I don't know how many pages it will be total, but I know how it starts, middles, and ends. It might be a while. Some months will have extra items like wallpapers based on that month's events, location sketches, that kind of stuff. I'm pretty excited about it.

can you guess my name