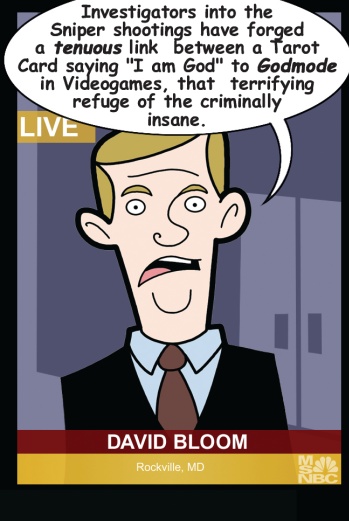 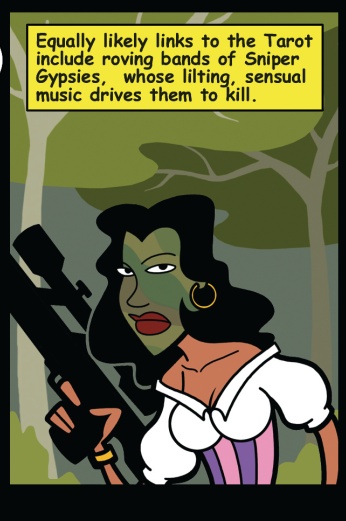 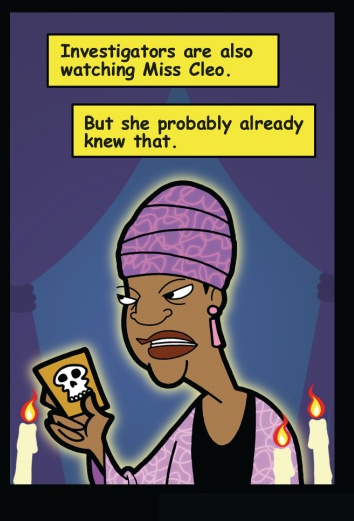 Here is the latest strip. Sorry about the lateness, I inadvertently uploaded this comic into Earth's far-flung future. I should mention that the mysterious Sniper Gypsies come to you courtesy of my last birthday coupon.

Gabe and I saw The Transporter avec les filles on Friday, and before things got underway we considered starting a pool to see which major media outlet would connect those sniper shootings and videogames. We laughed about it, because it was a ridiculous thing to even consider. It had already happened.

He told me about it Saturday afternoon. It had apparently showed up in the Washington Post on Wednesday, as well as MSNBC - the same brainiacs who forged the nine-eleven/flight-sim connection. At a show that night, I overheard three people behind me discussing the latest news: the sniper was probably a fifteen year-old gamer.

This makes me so Goddamn mad. I turned around and just looked at them for a moment. Then I looked forward again and took a breath. I wanted to slap them and say Hey, you fucking jackasses! Don't you remember when adults were talking about your "rock music"? Is it not perfectly transparent to you that the media gleefully demonizes youth culture? You should be ashamed of yourselves - one, for not remembering. Two, for taking the manic extrapolations of shock media and public officials at face value.

The video in question refers to "investigators" who are looking into a possible gaming connection, and I'm wondering if these guys have ever investigated anything before, or if this is like the first thing they have investigated. Maybe they took a break from investigating and they're just kind of getting into the swing of it again, because a death tarot card that says he's God on it has no sensible correlation to videogames. I'll grant that games have firearms in them, though. But unless you're trying to kill people on your computer, they aren't much good for anything. You have to wonder if it's even worth debating an issue like this with people who don't know if something is real or not.

Nevermind that this supposed junction between violence and games is pure mythology - it has never been proven, it is a political manuever, it is the opposite of true. Mythology is actually a good way of considering it - look at the role fantastical bugaboos like "violent games" play for us. We don't know why exactly people hide in high places, load weapons, and kill children. We will all agree that it is very frightening to think that you could just pop out for a video and then never come home. Something needs to fill that vacuum, and nebulous monsters - like beasts of legend, impossibly large - are supplied by a ready media. Violent Videogames. Makes sense.

As long as you don't think about it.

there is an absolute zero