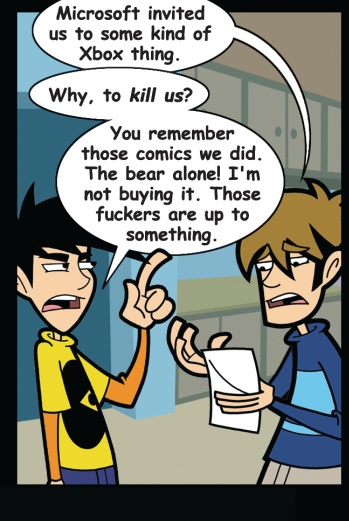 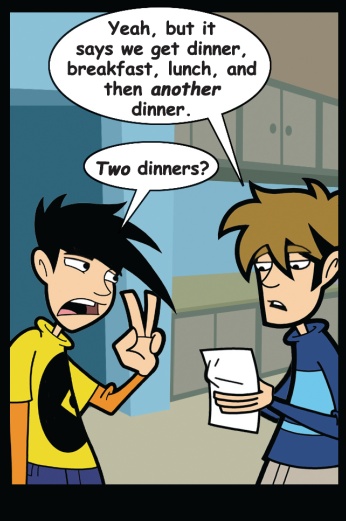 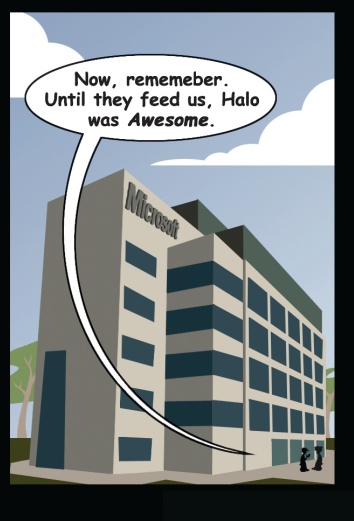 I didn't see it announced anywhere, but it is certainly true that we were invited to Microsoft. Specifically, invited to the "Xbox Live Boot Camp," hosted in the Millennium Buildings where their gaming operation is housed.

I'm surprised that they found us a worthwhile investment. When I say investment, let me elaborate. Take a look at the menu for the Fish Cafe, the place they took us Friday night. That is not the sort of place I am accustomed to eating food. I will tell you that their 10 ounce steak was so Tender that it seemed like it couldn't be meat.

The Xbox Live Boot Camp was a general introduction to the service and some of the titles available both at launch and beyond it. As a group, there were maybe sixteen of us - and I was surprised to see no representation from IGN or GameSpot. I didn't really talk to that many people, so I guess it's possible that they were there and I didn't know. The list I remember had a guy from Team Xbox, XboxAddict I think, Fragmaster was there, and who else. I'm trying to remember. Oh, we sat by a couple really great guys from Operation Sports that violated us in NBA2k3. That was real good. Shit, they even invited Billy from Planet GameCube, maybe they didn't know. But yeah, some decent people, but I didn't see the usual suspects I assumed would be at an event of this nature. I would come to realize that this was meant to be more of a "community"-styled event and less of a general press event. I'll get back into that in a moment.

Me myself, I was already sold on Xbox Live as a service before I went to this thing. I've been very impressed with it in general, but there's actually more to it than that - I don't think the Xbox is finished without it. That isn't to say that it's not the most powerful baseline hardware in this generation, or that the capacity for great games isn't there. It's just so clear that the Xbox as a device was conceived with this connectedness in mind that it feels like it's missing something. I don't just mean for explicitly multiplayer gaming. Think of single player experiences you can expand with new levels. Social experiences that are not games, in the classic sense. It has the capacity to broaden the platform. No, broaden isn't right. It might be better to say that it completes it. It makes their usual hyperbole regarding the machine's merits look more like genuine enthusiasm.

It might be that it's Halo 2 that really drives the adoption of the service, but you won't be without things to play in that interim period. Sega's sports offerings of every conceivable stripe should be enough to draw many people. Many of the games we played were not quite ready for prime time, preview builds, so when I say that I would never play Unreal Championship again if I could help it, understand that the comment is based on that. Ghost Recon, in my opinion, should look a hell of a lot better than it does. MechAssault is Goddamn near perfect, and if you're picking up Xbox Live next month you should just grab it. Though Gabe returned Whacked to the store after five minutes of play, I find that it's a game I play every day at least once. I enjoyed Moto GP as well, even though I'm terrible at it. When there are sixteen players in a game, you can hear everyone in the game lobby - but when racing, you only hear the three people closest to you. They did this for bandwidth reasons I'm sure, but the fact is I think it points to some interesting uses down the road.

The two lingering questions I had about the service go like this. The more I read about it, the more it became clear that it would be gamers (by and large) who would be running their own servers. That's probably the way it will be with most games. What if people aren't willing to host games dedicated, or there aren't enough servers out there? They had a pretty good answer. They have this wall there completely covered with all manner of charts and graphs, in addition to a number of live machines that keep track of virtually any statistic you could possibly care about. I've seen it. They intend to monitor usage of this kind, resolving server supply issues in a reasonably dynamic fashion. My other question was stickier, and they couldn't properly answer it because nobody really knows yet. I was curious about additional charges. Most games aren't going to have extra charges associated with playing them, or even getting new content at release. But for a massively multiplayer game, or PSO... Do you need a fee on top of your Xbox Live payment to play Star Wars Galaxies or get Hunter's License, let's say? He (or, Andre) agreed that something like Galaxies would probably have a charge associated with it, but it might be less than it would on the PC. As for PSO, he didn't know. This is because it isn't Microsoft that sets those rates. If a developer wants to charge for their game monthly, they can. If they want you to be able to play free, but get new maps on a pay basis, they can do that. If they want to give out play and maps but just charge for player models, they can do that. The idea (as they see it) is to create an infrastructure that will attract developers and publishers, and we'll know just how effective they've been in the next few months.

As I said, it became clear that this was a community oriented event. It became clear when a man stood on a chair and said so. They wanted to find ways of working with us to get our group's varied content onto their site and thus build and maintain momentum for the service. I didn't take this as freaky or sinister, I mean, obviously they want people to like what they're doing. They're putting a lot of time and money into the idea, and it would be nice if it worked out. Here's the deal, though. You don't have to massage gamers into playing videogames, online or otherwise. We naturally want to do this. If you make an excellent product, we will tell each other until everyone who is interested knows. They have made an excellent product. The hard part - as I see it - is over.

As it turns out, Gabe and I had nothing to fear from Microsoft, or even from Bungie when we went through there (very quietly). It was just as my experience had been with Kelly Flock, when I talked to him. People who believe sincerely in what they are doing don't mind if you tease them, because they they had real reasons for making the decisions they did. They were nothing but polite, and very forthcoming with things to eat.

why can't i get along with you