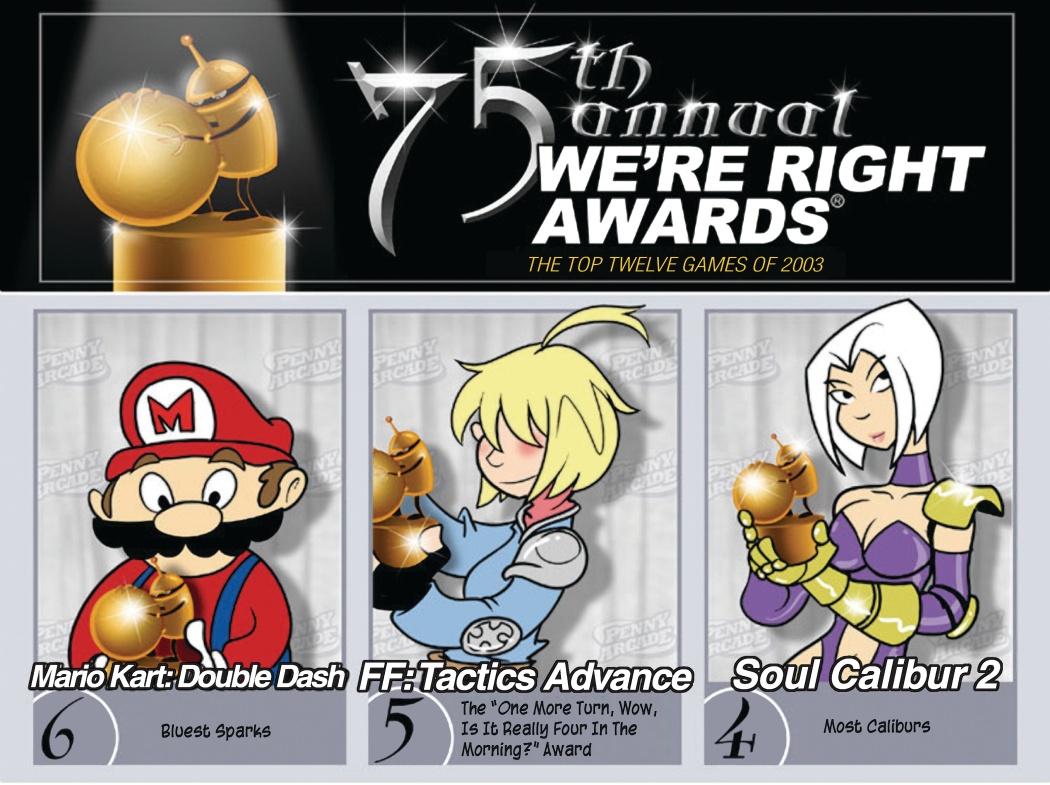 I just don't have the mechanisms to interface with normal people, and every family visit just emphasizes the fact. I just referred to my mother-in-law as "The beast spoken of in Revelations." This stuff just comes out, and I don't know how to get it back in.

We now return to the 75th Annual We're Right Awards.

We finally had a chance to play eight players, two to a kart, and there's simply nothing else like it in the entire continuum of our passtime. A cooperative racing game simple in concept and pure in execution, the game is so intense race after race that it is actually physically exhausting. Nintendo makes it hard to defend them at times, when their sparkling first-party titles slow to a trickle and they make what seem like backward decisions regarding online play. I certainly don't want to give Nintendo credit for something they didn't mean to do, but play Mario Kart: Double Dash with a group of friends, together, and tell me they don't have a point.

Strange as it is, the GameBoy Advance is becoming the go-to system for satisfying tactical combat. You could amuse yourself practically anywhere with the beloved Advance Wars series, tuck in for something with a little more meat in Tactics Ogre, or wile away the hours with Fire Emblem's balanced weapons and political intrigue. Final Fantasy Tactics Advance stands above, combining depth and accesibility with a light story and SquareEnix production values for an accomplished tactical game, a remarkable portable experience, and a great sequel.

What's to say, really. What seems at first glance like a stock retelling of the Dreamcast classic unfolds like some origami creature into strange dimensions, revealing itself as subtle, elegant, and modern. It ruled our life for months, first at import and then again for domestic, and it is seeing yet another resurgence. Some games are classics the second you pop them in the tray - Soul Calibur 2 will grace televisions for years to come.

Now that it's the twenty sixth and all Christmas mysteries have been revealed, it's time to go back to being anti-social. Perhaps you're stuck at the parents' house, as I am, forced to make due with an ancient Dell possibly unearthed in an archeological dig. What you need are lean games that will forgive older hardware and wear the rough edges off family misery.

In this regard, Addicting Games can absorb as much time as you need it to. Of course, Popcap has ever been our truehearted companion - their recent Rocket Mania (web or download version) can do the job, but the even more recent Zuma is almost perfectly equipped for zero-commitment, time-wasting duty. Breaking as it does into a market saturated with Mayan-themed puzzle games featuring stone amphibians, perhaps its mixture of Bust-A-Move and Marbles will help it stand out.

Here's the one that might keep you up at night: Star Chamber. If you enjoyed games like Galactic Civilizations or Master Of Orion (X), star empire type stuff, I have a feeling you will be reasonably intrigued if not seized abruptly, filled with glistening eggs as Star Chamber clutches you in the dark.

I read Bruce Geryk's passionate review of Star Chamber late one night, downloaded it immediately and ran gleefully through the tutorial. The game itself is free, just an eleven meg download - that's not how they get you. Here's how they get you: it's a card game. A collectible one no less, with a game board that represents a star system and and worlds which are useful to varying degrees. So you can play it online and solo with what amounts to starter decks, or you can hit their Card Store to purchase virtual boosters, boxes, or tickets to enter online tournaments. Alternately, subscribers can receive a few packs and tournament entries each month for about six bucks. At any rate, those are not matters you need to grapple with at the moment. I just wrapped up my first game, and I can tell you that right from the outset it's more than enough to keep your hand on the mouse.