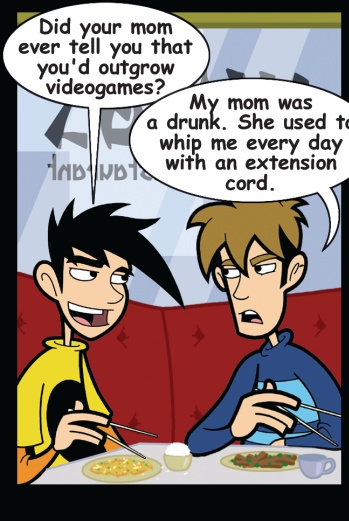 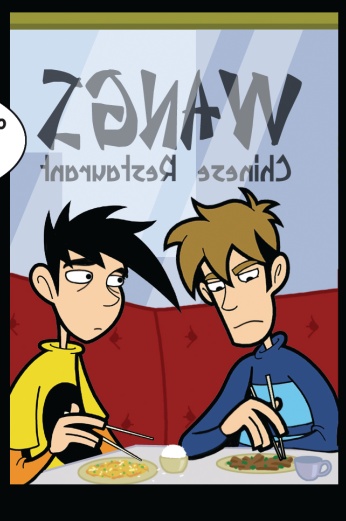 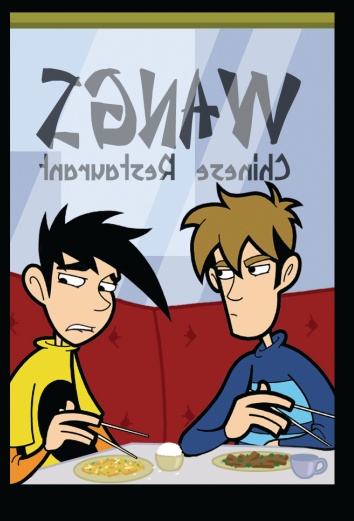 Chinese food is such a critical element of our operation here that I'm surprised it doesn't come up more often. It's fundamental, and these exotic dishes inform everything we do. This strip takes place in just such a... place.

Just in case there was someone who thought we hadn't sold out yet, Microsoft invited us out there again. The primary goal of the visit was to show us Tao Feng (which Gabe already talked about), and hopefully Brute Force if they could swing it. Sadly, they could not. No-one ever told us shit about Kung Fu Chaos, maybe it just came up at the last minute. I'm getting ahead of myself a little bit.

First of all, who should be the PR guy there but Michael Wolf. Astute readers will recall that we depicted him as an incontinent meta-idiot who represented gaming media in general. He's actually quite reasonable in person, fragrant, on the whole I would not call him vile.

I think the way these PR things are supposed to work is that they show you a fairly fixed (I don't mean "not broken," I mean "within strict parameters") representation of their product, then they thank you and you can go home. That is not particularly interesting to me, and I doubt it is for them either, because it's very easy to convince them that you should be able to see whatever you want. That's pretty much what happened here. Michael was a game journalist for a while, so he had a natural curiosity about the new build of Kung Fu Chaos just as we did, and so for an hour or so it was like we were hanging around in a living room. I am aware that the living room in question was a actually a meeting area housed at the nexus of our world's most powerful software corporation.

So, here's the deal on Kung Fu Chaos.

What we're talking about is a brawler-type party game, like a PowerStone let's say. That essentially means four-player fast action in highly reactive environments. You can jump, execute a couple attacks, taunt, and block. This part isn't all that complex. Where the richness comes in is that each level is essentially a movie parody, and as time passes the characters might break through an upper level balcony, then ride a boat, then go up on this thing, which culminates in capture by the police or something. They're essentially action scenes. Between those portions you have what's called "Short Films," essentially mini-games in the vein of Mario Party that are a great change of pace.

I've talked to people that tested it before, or played it at E3, who said that something was just missing from the game. I agree that this was probably true at some point. Kung Fu Chaos is the sort of game that could have been very bad. Miserable, in fact. And it's the sort of thing a publisher tries to rush out because they're trying to recoup and they don't actually expect much from it. But at some point, perhaps fairies were involved, but they were given the time to do it right. Knocking people down and taunting them is fun. The game is full of strange humor. The feature that I expect to get a lot of love in reviews is the replay mode. Sure, they're saveable or whatever, thanks Hard Drive. But the round that you just played, when watched in replay mode, takes on the visual artifacts of old film. There is music, slow-mo scenes, and even director commentary if you want. It's just much better than it had to be, better than you'd expect, which is sort of a theme with this game.

The only complaint I can level at the game is that there's no Goddamned Live support. This is the game that should have been there when the service launched, it would have done what Whacked couldn't. I liked Whacked just fine, I just know I'm in the minority. Multiplayer support aside, new content and characters would have sealed in the freshness, or juices, I can never remember which. I think you lock in juices and seal in freshness.

I guess Best Buy broke the street date for SimCity 4, so it seemed only proper to pick it up early. The one thing I can tell you at this point is that it is very nice to look at. The last SimCity I played with any real vigor was the second one, so I'm looking forward to investing myself in it. There is apparently some kind of cooperative, region-based multiplayer mode called SimSomethingSomething, but it doesn't appear to be ready quite yet. In any case, this release kicks off a few expensive months dense with highly anticipated titles.

i noticed there wasn't a chair