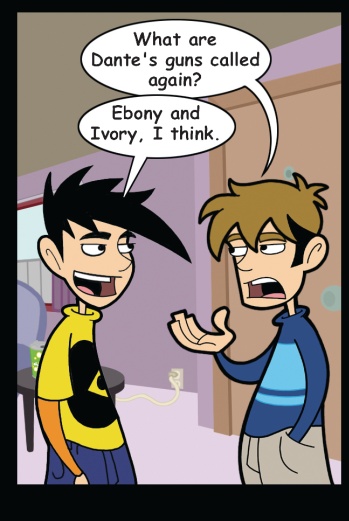 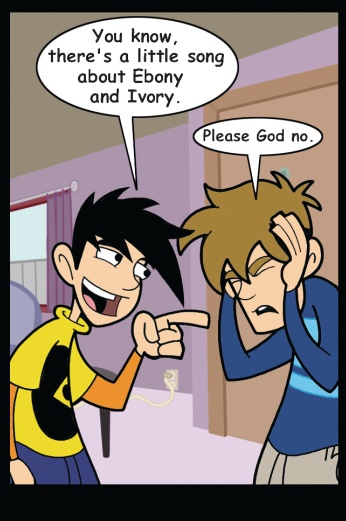 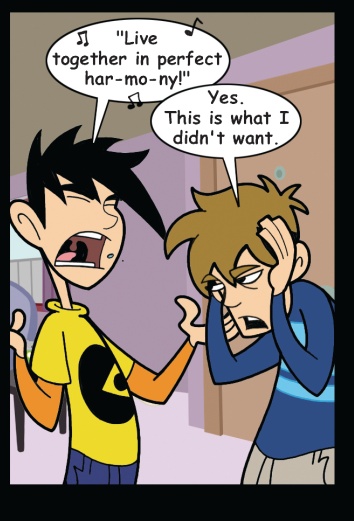 The guns are actually called that. So is the song.

It is perhaps my life's greatest sadness to announce that the bad reviews of Devil May Cry 2 are right on the money. Where the reviewers and I might differ somewhat is in their extremely high opinion of the first game.

The complicated thing is that I still think that Devil My Cry 2 is fun, it's fun to shoot the guys, and if fun is the only axis we're analyzing then it does okay. Dante - already a very stylish character - has been given some schmancy new maneuvers that, while not always useful, are always appealing. So style, at least where characters are concerned, we've got that too. Already it sounds like I'm talking about a Woo flick. There are just so many missed opportunities in virtually every other department that it would be impossible to recommend it straight across without about fifteen minutes of qualifications.

Though in my opinion (this is from the archive, actually) the first Devil May Cry "loses cohesion" an hour from the end of the game, Devil May Cry 2 has never even heard of cohesion. "What's that?" it will ask you, with a quizzical look. "Well, Devil May Cry 2," you will say with some exasperation, "Cohesion is when the things that happen in the game, I mean, in you, seem to fit together sensibly and bolster the entire concept."

While the savvy action portions of the game have migrated from the first with only a few additions, storywise the game is completely MIA. It's not that boring things are always happening (although I guess that is up to interpretation), it's that nothing really happens, ever - nothing you don't expect, anyhow. I was titillated by the idea of Dante doing his thing in dystopian (spell checker suggestion: "Dyspepsia"), urban environments, at least until I saw them. It strikes me that I wrote papers like them in elementary school: rote, repetitive, meandering excesses that did not utilize higher brain functions, for myself or for the reader. Don't even start me on the fucking camera in this game. I want to stress that, even as I am typing these things, these terrible things, I do sort of have the urge to hit some demons up in the air with my sword. That's the grim duality of the game, it has these cool characters with spectacular abilities in stupid places doing things I don't care about. Whatever I might think about the conclusion of the original Devil May Cry, a lot of very cool things happened. It had really interesting gothic sensibilities, a healthy dose of strange melodrama, extremely hot arachnids, and so forth. When I say that something is missing from the one I'm playing now, it is as though I have the version without cutscenes. It is that jarring.

Like any good action movie, DMC2 does sport a few clever set pieces that you will appreciate. I doubt that they will overshadow the rest of it for you. I hope that the third time will be the charm, then again, I hoped the second time would be the charm.

to fight is to defend