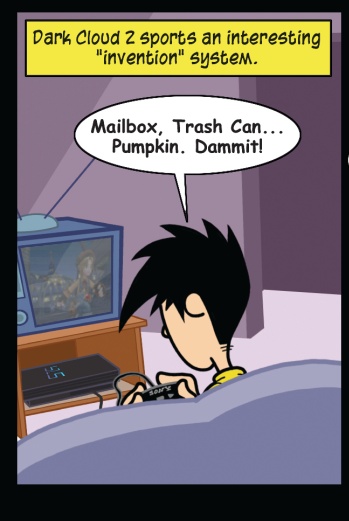 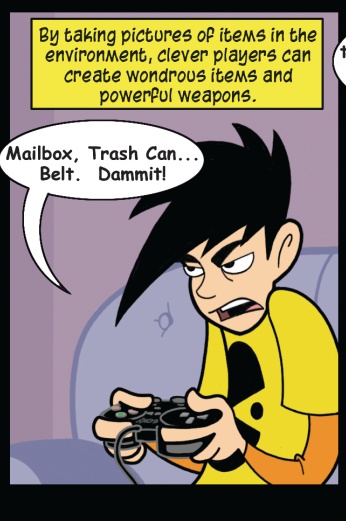 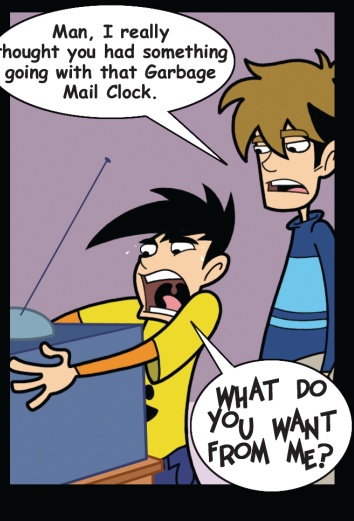 While my own gaming equipment was in disarray this weekend, I would take any opportunity to contact Gabe and see how he was progressing in Apex and Dark Cloud 2. It sounds as though he more than took up the slack - Gabir, his company in Apex, apparently has so many individual employees they needed to expand the facility several times. It is, I am told, the racing game one plays in heaven.

Hearing about Dark Cloud 2 made me long for it. I had read many reviews trying to come to a decision about the game, and I must have missed the one that talked in detail about the inventions system. You have a camera you can use to (pokemon) snap pictures of random objects in the environment, and combining three of these thing is the way to achieve some of the better items. He is very proud of his Aquarium, for example. To facilitate this newfound vocation, Gabriel has apparently become quite the shutterbug - risking life and limb in some Mutual of Omaha type shit to get shots of dangerous monsters in their natural habitat.

I don't doubt that moving with geeks always shares certain characteristics. The comparisons to Tetris, and indeed, the humming in unison of the Tetris tune. In a single truckload, Porkfry and Doc were able to fit an entertainment center, a couch, and a desk that I had built inside the apartment that was nearly impossible to get out. They referred to this as "rolling a natural 20," which makes them huge fucking dorks, but then I take them to task for their liberal reading of the the Player's Handbook. Because they had ample time, no penalty for failure, and were not harried by fierce orcs, they could make attempts until they got it right - making it more akin to "Taking Twenty," as shown on page 62 of the PHB. Someone else came over and argued this as well while my things waited silently in the car. They don't care when they get in there, they're things.

When I set up my laptop in the new place, I saw a wireless access point called "erik_net" that I hoped to ride to freedom. I had an elaborate scheme wherein I would mummify my apartment in cable in order to share these ill-gotten gains to every device I had. I would be the Packet King of North Fremont. It turns out that I had little to no actual signal from the paltry "erik_net" which dashed my hopes. I held the cables, the fallow bandwidth they contained, and wept. No Charge saved my ass again, in fact, they brought you this. It's a free ISP on this side of Washington State that is pretty handy to keep on laptops and the like. I have NetZero on here as well for when I leave the state, but I can count the number of times I do that per year on one hand and have fingers left over. Shit, I can count that on just my ears.

I want to caution you about staying in a bathroom for around an hour cleaning the ceilings with bleach. It might seem like fun, but over that period toxic chlorine fumes excavate the most tender parts of your brain. These little nooks are nice for keeping things like keys or movie tickets, but when you try to carry on a conversation later you can only say things like "Mornum" and "Hoong" - these are sounds which have no definition in my language.