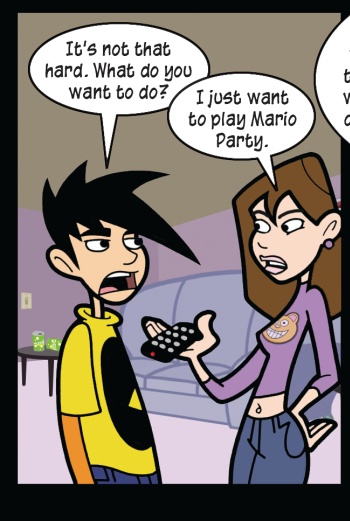 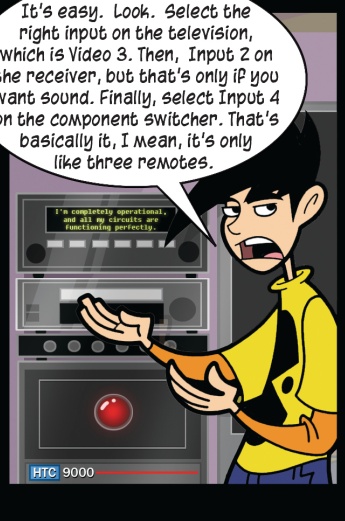 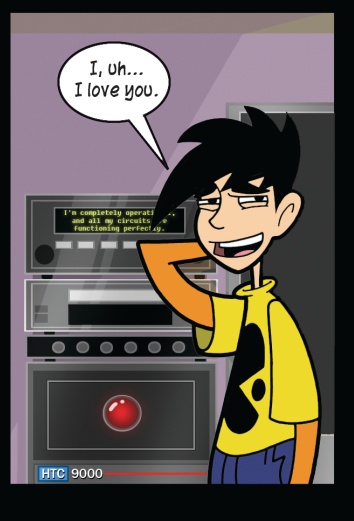 Gabe got his hands on a component switcher yesterday, no doubt prodded into it by Storm Shadow. He got it yesterday as we were writing the strip, and instead of setting up - or even opening it up and looking at it - he buried it under something in the closet and shut the door. Today's comic will take place probably when we get back from E3, provided she doesn't find it first.

I nearly forgot to mention it, I just saw it open on the floor at that brought it to mind: RTCW: Tides Of War, for the Xbox. Gabe had very nice things to say about it already, but I mainly want to add data to his initial assessment. We had a chance to try out the co-op play, which was fun on the whole - the single player game needs a hook like this, in my opinion - but for some reason your companion moves around in a strange and hitchy way that it pretty distracting. God only knows how the online multiplayer is able to look so smooth, when two guys on the same box don't get the same treatment. And the online play is very good, but as with every Live game there are people out there running servers that have no business running a server. As for the multiplayer, my PC gaming brethren won't be blown away by anything that is presented - but console gamers, take note: Return To Castle Wolfenstein is one of the finest multiplayer games our platform has ever seen. If you have never played this game before, or only seen it through the window as you looked longingly at a stranger's top-of-the-line gaming machine, now is the time for you to get in the swing. Live-wise, you will be well served by clean menus and a fuckload of game-tuning options. Game-wise, an ample supply of maps and interdependent classes may shock you.

I received some very angry mails about why I'm "wrong" about Planetside costing too much, complete with chiding, imperious tones about the "real world" and how there are many costs to the developer that I'm just not taking into account. We'll, I'll give you that one. The reason I don't take them into account is because I don't care. I don't care that they need to restock the pop machine or put a two-page advertisement in PC Gamer. I don't care that they need to pay a legal team to properly terrify the authors of fan fiction. I'm not their fucking accountant, I'm a consumer. I don't care why they charge too much for me to pay in order to play Planetside, I just wish they hadn't - I want to be able to withstand their monthly charge without having to bite down on a strip of leather. If you want to pay it, I mean, shit - knock yourself out. You're going to have a great time, I can vouch for that. I just won't be there.

I have received a growing number of mails regarding Penny Arcade shirts and whatnot, and the inability of people to find our unique offerings on GameSkins. Just as a quick note for anyone who didn't see it before, Kiko over there doesn't have our shirts because we told him to send them to us - we're opening up our own store which should be available while we're at E3 next week. I know I've been saying that for a long time, but there was always one more stupid thing that had to be done. At this point, we're really just waiting for our shirts to come from the printers. We also got stickers, which you can't buy but will come with everything else.

i worry about your shoulder blades