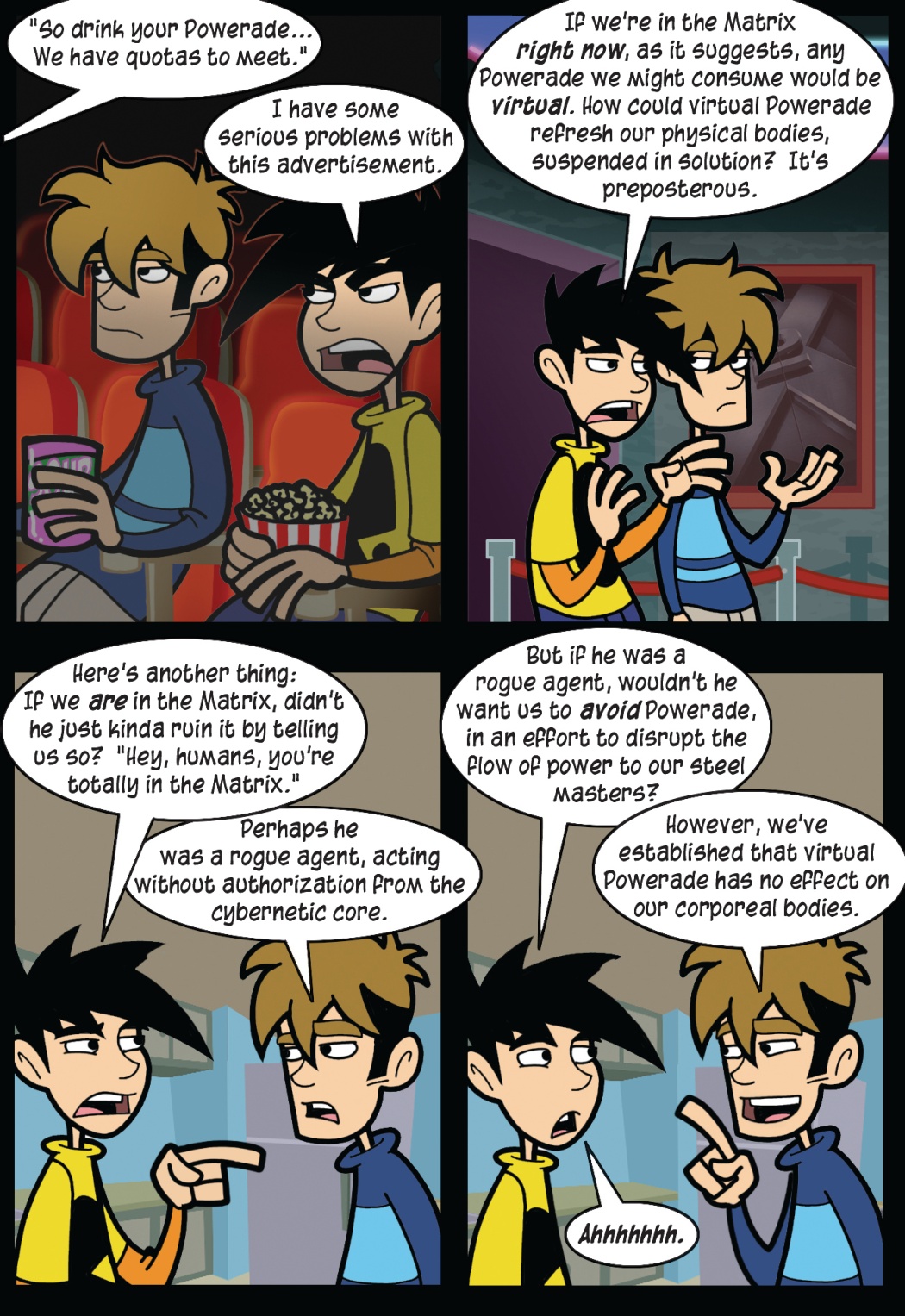 The gyrations we might go through to make something ridiculous match established canon are well known, even if it's something like a bedsheet, or in this case, an advertising campaign. There's a Powerade commercial before X2 that is - I swear to God - over eighty minutes in length. It really is like a movie about Powerade that you have to watch before your own movie may begin. The fifteen minutes before your film are now a non-stop psychic barrage.

I'm so excited about E3 I don't know what to do with myself. I play Planetside pretty much, wringing every last moment from that Valhalla, until Daddy takes the T-bird away. I've got a batch of free stuff that I've been playing too, just to take the edge off.

I shudder to think what the young might call Reflexive's Crimsonland, though I fear that referring to it as the Bizomb is accurate. Classic arcade games just do me right, when every cabinet and every marquee represented the birth of a new genre. Robotron 2084 is a fantastic template for gameplay, as the more recent Smash TV proved - and modern independent games like Mutant Storm and Crimsonland have taken up the mantle. Crimsonland takes it a bit further with a robust supply of great weapons, arcade-style powerups, and even "Perks" a la Fallout to enhance your ability to pulp aliens, zombies, or whatever.

I saw links to a few of their new games over at HomeLAN, and now I visit Garage Games pretty regularly. Using a branded version of the Tribes 2 engine called Torque which you can license for a hundred bucks, the games you produce end can end up at the site for humans to purchase. In any case, liked Marble Blast, liked Orbz, but what I've really been waiting for is ThinkTanks. Developed by ex-Dynamix guys at BraveTree, it was exclusive to Linux and Mac gamers until very recently, which filled me with an impotent rage.

In anticipation of Etherlords II, and also because I wanted to play a CCG without paying for one, I've also been playing the demo of the first game. When I get back from E3, I think I'll probably pick it up. I had downloaded an earlier demo a while back, and while I thought it was cool, I didn't really understand it. Looking back on it, I may have downloaded the German version.

So that's what I've got going on.

I do, however, require an Amen from the Old School on this one. I need to know if any of the true players recall the Archon series, which I played on the Commodore 64 but probably came for the Apple IIe or something. Essentially an action game with a strategic metagame, it combined arcade play with chin rubbing strategic fancery. Even if you don't, Lucasarts certainly recalls it - check out the screens for the recently revealed Wrath Unleashed. I thought that we were talking about a fighting game or whatever that drew on mythology, which would have been fine, hey, go for it, until Gabriel mentioned this screen in particular. To this date, I know of no game that has been made worse by the addition of a hex or two. Just throw a couple in!

it's easy to be wrong