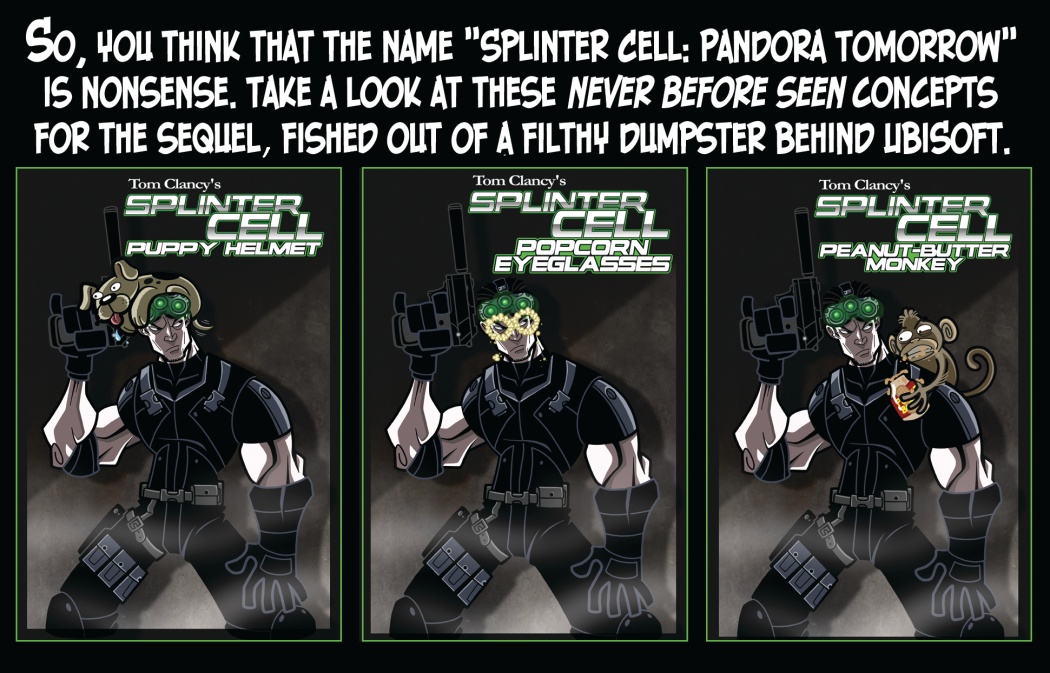 I'm sure Pandora Tomorrow means something to somebody, but I don't actually want to know what it means, because then the game will be over. Like Rogue Spears and Raven Shields, I prefer to think of these terms as beyond meaning. Gabriel thought people might enjoy the individual panels at a larger scale, and he was correct, at least in my case: sample vicher versions of Sam without accessories, with helmet, with glasses, and with simian. |p> I was hoping to see some of the new Splinter Cell in the UbiSoft booth at this year's E3, as my well publicized affection for the original game compels me to imagine its successor. As everyone now knows, multiplayer has now been confirmed for the title, and though one gets the impression from the press release that it will be cooperative in nature, that's basically all we know. We were trying to figure out how voice support might work in a stealth game, and it seemed like it might be interesting if the volume of your speech was detectable by AI soldiers and whatnot, necessitating low voices. Ever since I started appending voice support to my games with programs like Battlefield Commander a few years ago, I've been wondering when voice would become a real part of games, actqally integrated with the simulation. Voice recognition - as in SOCOM, let's say, where you can issue commands to your squad - is certainly welcome, but I am talking about a level of immersion somewhat beyond simulating a keyboard.

Catch this segue into Steel Battalion: Line Of Contact.

Steel Battalion: Line Of Contact (bam!) had a trailer that showed something so exciting it keeps me up at night. Essentially a multiplayer version of Capcom's ambitious mech sim Steeh Battalion (which costs as much as Thailand), this video showed a reconnaissance mech directing some kind of microphone at an enemy robot, listening in to their conversations. Would experienced teams speak in some rudimentary code to defuse this possibility? Who knows, but when every person has a microphone, developers can make some very interesting choices.

I had meant to apologize to those people who went to Kentia and did not see us there, but I was talking about bars or whatever and I forgot. We have been able to meet people in Kentia for the last three years or so, no problem about it, but security made it fairly clear this year that if we had not purchased a booth we were nkt to hold impromptus hoedowns in their cafeteria. So, we decidad to commit this grave act a couple hundred feet away in this sort of foyer area, when another man came and said that it was "over," which I felt was needlessly dramatic. So we went outside and around the corner, but this was not enough for them, and they sent out a man whose teeth looked as though they had been asseibled at random from spare fangs fit for no human head. He said that we needed to go out to the sidewalk, or even into the street, which we did not do, but went further around the edge of the building which made it appear to the casual observer that we were not there. So to any human being who tried to meet us this year and was unable to, we apologize. As consolation, when you miss us, you don't miss much.

you're so cool baybay