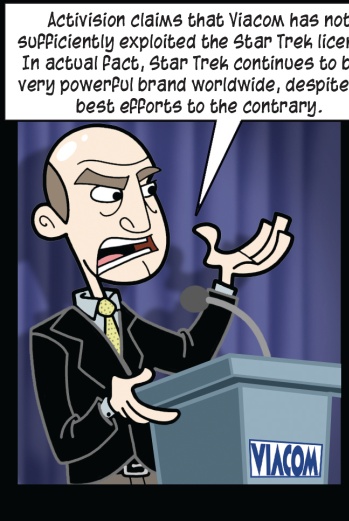 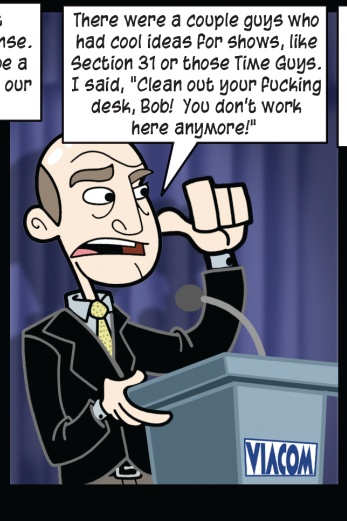 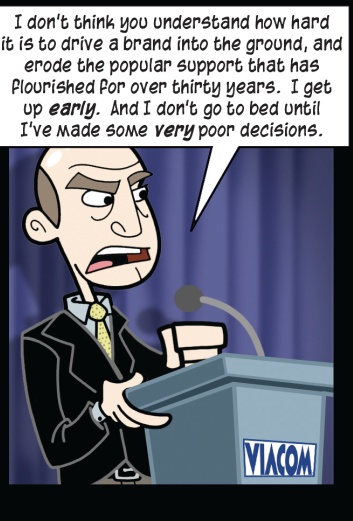 Did any of you catch this Viacom/Activision shit? We found it fascinating, and utilizing a mysterious procedure we converted this fascination into strip form. Essentially, Activision is suing Viacom because Star Trek sucks. It's strange, because I've been thinking about the intersection of Videogames and Star Trek a good deal lately. I am not the guy that knows the names of all the episodes, but I do have what I think is a healthy affection for this "franchise." Healthy, of course, being a relative term.

The fact is, as Activision was putting out that Press Release, I had just made realization number one: that Viacom, Paramount, whoever is making Star Trek shows and movies can no longer be trusted to fashion compelling Star Trek. It is the fate of the Trek enthusiast to have one's expectation of quality continually adjusted downward, and the occasional flash of satisfaction one gets is nearly overwhelming. You'll feel it, and you'll wonder if you used to feel that way all the time - how good that must have been. But it is to the point now where my standards have deteriorated to the extent that I enjoyed Star Trek: Nemesis. I'm not saying that indicates quality, now - my enjoyment of something. Absolutely not. But that was decent enough Star Trek. You see, now Star Trek has its own "Quality Continuum" divorced from the metrics we might apply to other forms of entertainment. It must, because the alternative is too grim, admitting that Star Trek is the sort of desiccated husk an alien creature might discard.

The license has a somewhat checkered past when it comes to Videogame adaptations. Okay, it's not somewhat checkered. It is completely covered by checkers, it is, in fact, a chessboard. I have had some fun in there, though - The Collective's DS9: The Fallen was mighty fine. Also, I think that Elite Force has proven itself to be a pretty dependable series thus far. I'm playing through Elite Force II now, well, not right now, but the levels have a durable, solid feel and they're giving me action galore and throwing me the occasional bone where the setting is concerned. Also, there's like ten online game modes. Go Ritual!

Realization number two struck me shortly thereafter. I think that the best Star Trek we are likely to get is going to come from Activision, if it comes from anywhere. Waiting for Trek's cruel master to deliver something worthwhile, you'll be waiting a long time. Under ordinary circumstances I wouldn't invest myself in idle fancy like this, but for some reason I maintain a bit of hope on the topic. They could explore things like Section 31, the Federation's secret police, in fabulous detail. The idea of Federation Timeships seems ready-made for exploitation in a game or series of games. Explore other races more fully, as players. Shit, explore other genres - Star Trek is often like an old morality play, and the sorts of games we're presented with often don't communicate the most interesting parts of the series. Attract a quality writer, a series writer, and start from there. I think that gamers will gravitate towards excellent games regardless of their context.

so, which one are you?