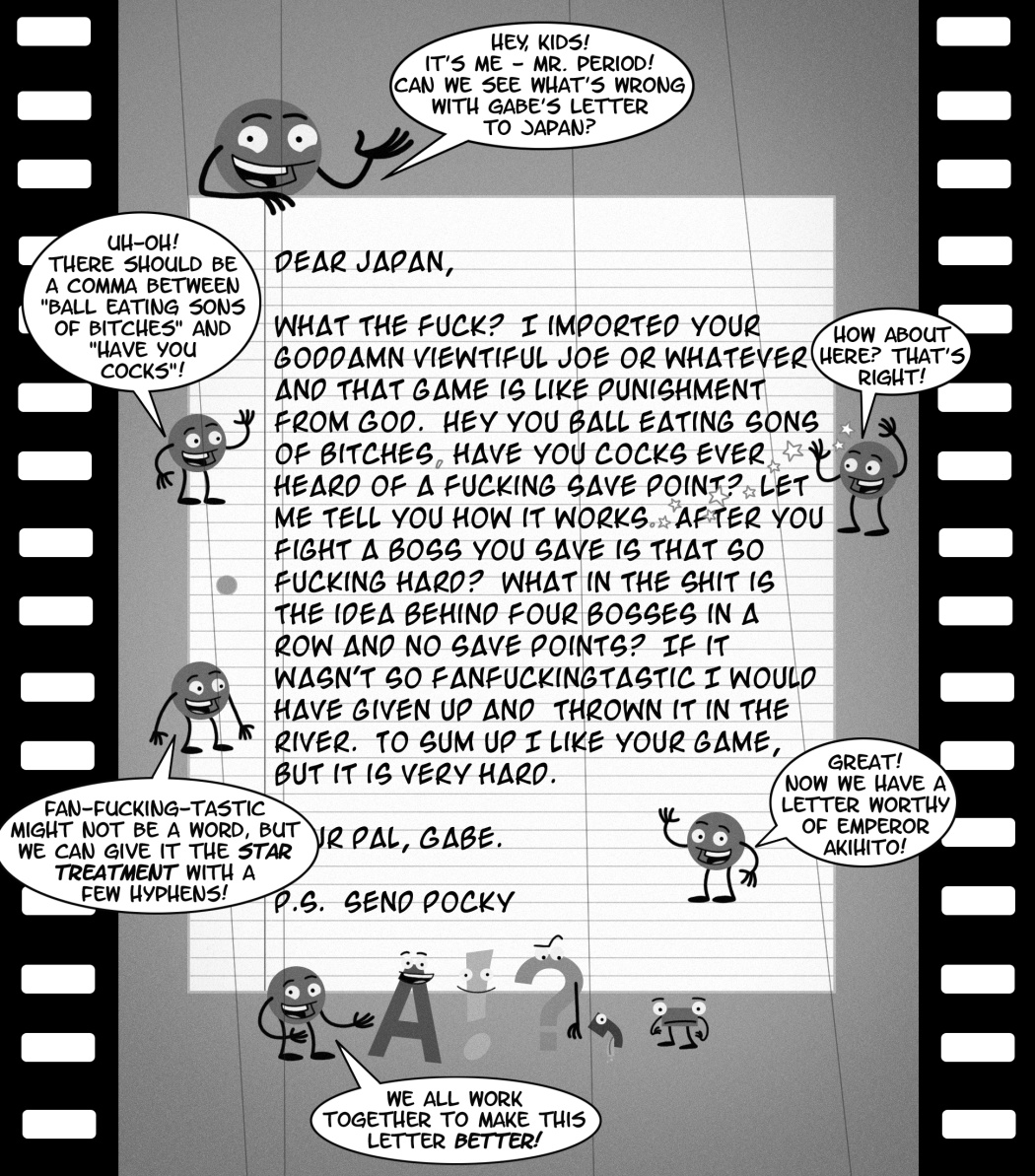 I love Mr. Period so Goddamn much, and now, you get a chance to see all his rowdy friends. While I mess around with Gabe about commas or what have you, my own mechanical understanding of written language is pretty terrible. I do things with hyphens that make professors faint straight away, and then I turn around and use the embodiment of punctuation in the strip. There are plenty of other errors in Gabe's letter that are left undiscussed, you may think of them as extra credit.

The list of things that make me a terrible business person are available either as a three volume set or a DVD-ROM. There is also a collector's edition that comes with my whimsical commentary and a game called "Bankruptcy," which is like Monopoly except with no money. I do things because I think that they will be fantastic, and then at the end I am left with boxes of shirts that no-one wants. When I see them all lined up at the bottom of the strip there, the only thought I can form is "I must have this on a shirt!" I want to have a shirt emblazoned with jubilant punctuation. My right and left brain are wrestling right now.

Most human beings agreed with my assertion that the Tron 2.0 Multiplayer Demo was undelicious. There were, however, five people who made it clear that my coverage of the game - which amounted to my saying that it was this or that synonym for shit - was "shallow," or a "copout." I would warn you not to expect too much from me.

When it comes to free demos, unless something really excites me I'm quite happy just saying yea or nay in some general way, linking you to the software and leaving you to come up with your own thoughts on it. In a case where you aren't out any money to try something, I don't know how much you need some exhaustive dissertation from me. But they seemed to take it as such an affront, when really I was just being sort of ridiculous. It was the type of naked exaggeration I do all the time, except now I was saying something they didn't agree with so that wasn't okay. I didn't like Tron 2.0, you can like it or not like it. And if you do like it, what do you need my input for? Don't you already know your opinion? And besides, who cares what I think. I told you, I liked Master of Orion 3. Doesn't that scare you away? I liked that Hulk movie nobody else does. If I say a game is good, you should probably avoid it like a stinging insect.