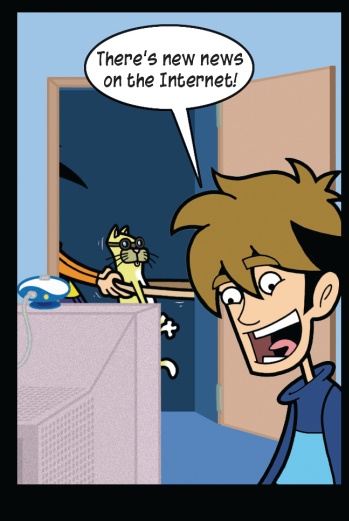 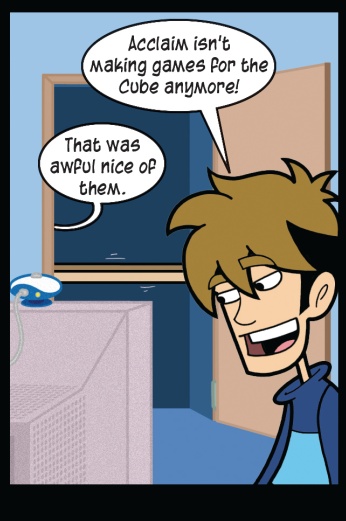 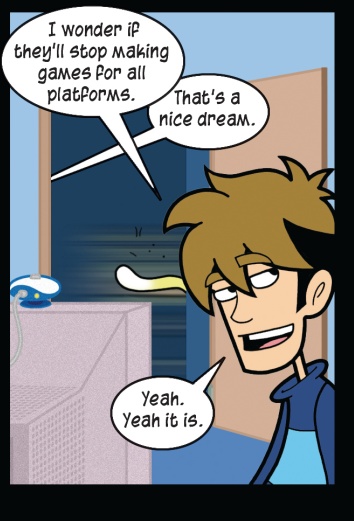 I have already confessed my concerns about Nintendo's game line-up in other strips and posts, but I hope you'll excuse me if that news about Acclaim not making games for the Cube just doesn't terrify me. In fact, it's a step in the right direction.

Somebody asked for a con schedule, and it seemed unnecessary until I realized that in the next three months we've got four of the God damned things. Gabe was nice enough to whip one up, we'll find some inconspicuous place on the page to put a permanent link. As you can see, the foul r stevens snookered us into going to that Las Vegas con. I have never been to this Vegas of yours, and I probably never would have if it weren't for this event. I didn't even know where Nevada was. I just looked at a map, and was surprised to find it down there by California. I guess I thought that was some other state.

By now everyone has heard about the young men who had a big plot to do bad stuff with a bunch of guns and swords. If it was just guns, you might think I was talking about something else. Maybe those one guys, or the dudes... You know, those other dudes. Those swords just give it away though, don't they! So they were absolutely covered with loaded weapons, these three young men with swords, and it was their aim to jack a car and maybe drive it around for a while until they killed some people at their school. They were, no doubt, surprised to find the procedure somewhat more complex than pressing a single button. And of course, the driver was having none of it - when he realized what these SCA motherfuckers were actually trying to do, he drove away. Then, the credits rolled on their grim endeavor. Some cops came back, and there was a tense moment before their Blood Pack or whatever they were calling themselves was hurled bodily into the dungeon, or "prison."

You already know what the media is saying about it, so I don't need to go into that. They're drawing parallels between their activity and Grand Theft Auto. I am making this note because my position of unwavering criticism of media coverage has been amended to include something else: that there are young men stupid enough to emulate these games. I have a very low opinion of high school, and the sorts of clean, effortlessly beautiful human beings one encounters there. I know that it is a source of torment. And I know that your shit is all tortured, because I've read your poems and seen that rendered skull spinning there on your page with the fire on it. I feel it. I was a black coat and some eyeliner away from emulating your existence. But the second you load a fucking weapon, I can't empathize with you anymore. I can't protect you. And I can't defend you.

my art is better than your art