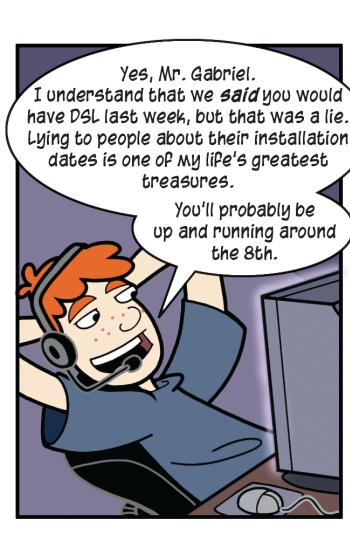 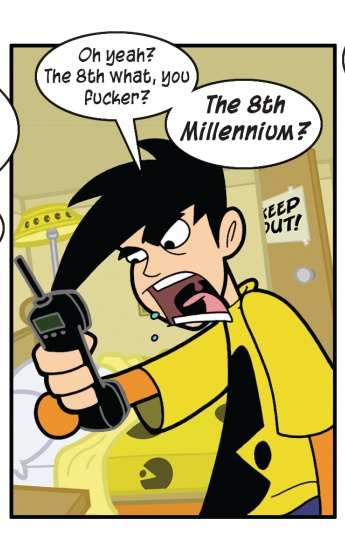 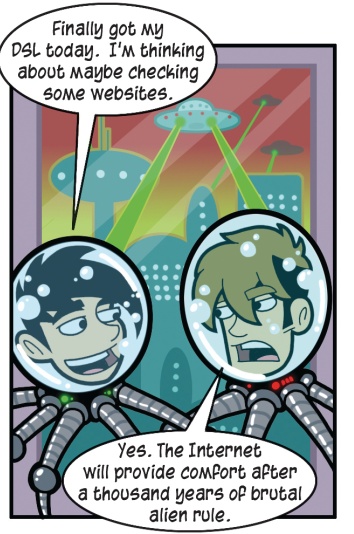 You might be surprised to hear some of the bizarre theories I receive regarding Gabriel's whereabouts. Clearly, it's not me drawing the strip - regular readers know what that looks like, the poor dears. It's just that the temporary dial-up he is using is immensely distasteful to him, and strips out all the joy of using the Internet. He's also been subjected to a jaunty parade of lies regarding the date of his installation, which made its way into today's comic. That's not even factoring in Kotor. If I like it as much as I do, and I think that Star Wars is alright, I can only imagine the violent seizures he must be having over there.

Hey, though. We ended up getting a chance to see both Crimson Skies and Counter Strike for the Xbox on Wednesday. Let me tell you about them!!!

Crimson Skies is going to be a pretty big title, I think, by virtue of the Live play alone. Just imagine a series of artful planes in sculpted environments dogfighting alone or in teams, capturing flags, or securing... chickens. That's not a non-sequitur. Well, it is a non-sequitur, but there is a Wild Chicken mode that is like One Flag CTF, where you grab a sort of daredevil, aviator chicken and take him to your base. It's not really clear what he does one he gets there, but there you have it.

We saw a level from a new build that probably wasn't ready to show yet, but revealed the sort of thing we can expect from a large-scale boss battle. What we can expect is a gigantic, steam-powered robo-caterpillar with a taste for dirigibles. We went from that to a level I had seen a little bit of at E3 I believe, a sort of Air Pirate haven on a breathtaking tropical island - Gamespot has quite a few images up of it. Some levels appear to be straight-up action, while others appear to have more of an exploration motif that lets you acquire missions from NPC pilots. In any case, the controls are such a departure from sims that you won't mind just tooling around some of these levels, flying through dangerous crags and whatnot. It's not hard to do, either - while not simmy, the controls allow you enough precision to feel as though you could be an air pirate had the circumstances of your life been different. I do like very much the execution of special maneuvers: doing a quick one-eighty or rolling the plane with a flourish (among other things) are executed by clicking the right stick and pressing different directions in concert with the left stick. Pressing the right back and the left forward, for example, will turn you around almost immediately. The use of these techniques is governed by a special meter that recharges fast enough for you to make use of these moves, but not so fast that it becomes stupid in multiplayer.

I have been excited about this game for quite a while, ever since I found out about it, and someone in a position of power must be excited about it too because they're being given the time to do it right. The only thing I'm not crazy about, really, in the whole game is the fact that you can't "target" an enemy plane and always have an indicator of where they are. Up in the right corner, sure, you have a radar but it is often a cloud of red dots - and what I'm looking for is a chance to fire another shot at that asshole I clipped before. You can press the black button, and the camera angle will change to show where an enemy is in relation to you, then you can seek him out - perhaps as you get more time in the cockpit this becomes a natural way to do it. They don't want the game to be a sim, they want it to be more of an arcade/action game, and they have philosophical reasons for not wanting this targeting thing. That's fine by me. I have philosophical reasons for wanting it, like, for example, I don't enjoy being frustrated.

Counter Strike for the Xbox is a beautiful, wonderful version of Counter Strike. It is what a terrorist Santa would deliver on Christmas Eve. But I'm never playing Counter Strike again, on the Xbox or otherwise. If you're still playing it, maybe you haven't heard about these stores they've got now that sell games, or other mods like Day of Defeat or Natural Selection. I repeat: This is an excellent version of CS, with beautiful versions of the classic maps that don't change the gameplay, they just make them look great. If you've never heard the term "de_dust," maybe you've never played it before now, you may very well lose a couple months to it. It is an unbelievably addictive game that I played every night for a year. The weapon selection menu is very workable with the gamepad, a pie-shaped affair you can grab your stuff from in no time. They'll have six exclusive maps, good voice support, an exclusive model for each side, *yawn* I'm starting to feel drowsy.