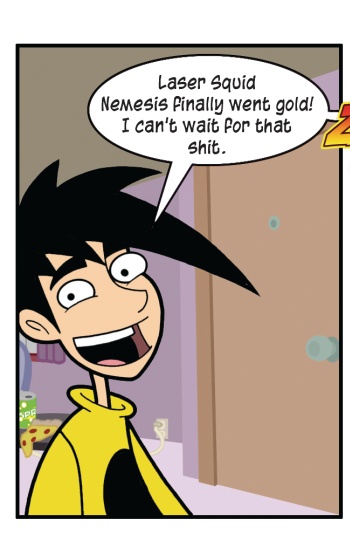 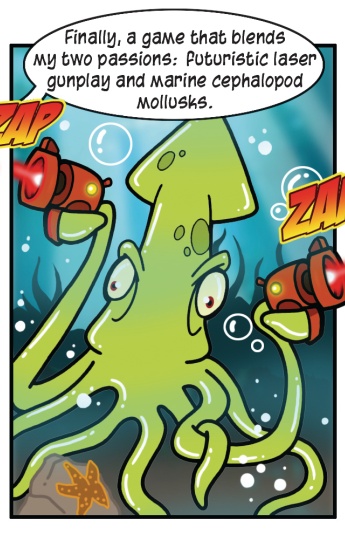 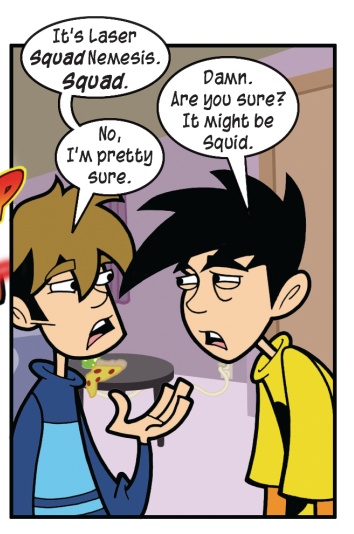 Laser Squad Nemesis is a play by mail tactical game that isn't just like X-Com, it's made by the actual X-Com guys. Used to be that I couldn't go a day without Porkfry sending me the first round - you can play a few free games if a subscriber challenges you, though you are limited in what armies you can select - and we would while away the afternoons in frenzied bids for galactic supremacy. I never knew they were planning on a retail release, as everyone is just downloading it now and that seems to work fine. But there you have it. We have produced a comic to commemorate the release of this game, or perhaps some other game.

I saw the new version of the Army game when I was at E3, and subsequently failed to mention it because I had been thinking about it a lot. I don't know how that happens, but sometimes when things are very present in my mind I assume that they are also visible or something. In any case, it is some pretty hot shit. The version I'm talking about here is the 1.9, which was leaked, and currently unplayable online. If you had held off on trying it before, either because you heard that portions of the gameplay experience were a bit raw or you were afraid that it would sign you up for the armed forces in the background, this might be a good time to try it.

Much of what I saw of it at the Expo was just tuning the experience somewhat - visually improved menu, music, the presentation was much cleaner. We're also talking about considerably more elaborate maps and player models, as time has passed from the initial launch it appears they've decided to raise the stakes a bit hardware-wise. Version 1.9 also adds the Combat Medic, and with it a fundamental rules change - as I understood it, a percentage of the damage dealt by a bullet can be treated by a medical officer, and left untreated injured tend to get worse. To be a medic, though, required that you attend courses. Training for new classes gets more elaborate each time they introduce one, and this might be the fanciest yet - you enter a Military Hospital and actually attend class and take tests. I'm not saying that taking tests is fun or whatever, but it's an interesting way to satisfy the game's mission.

It's got Punkbuster now, and eventually you'll see Special Forces troops with the ability to customize their weapons with via five distinct hardpoints - flashlights that can blind players, laser sights, paintjobs, all sorts of things. Looked great when I saw it, I think they're looking at Fall for that stuff. The current version, 1.7, is now available for Mac as well - but I'm fairly late on that news, as usual. It also looks like you have to pay for it.

Some humans became very agitated when we said that Knights of the Old Republic had bugs on Monday. Well, it does have bugs, bugs that might make you skip planets or wreck your saves. I'm not being unreasonable by mentioning them. I still played it eight more hours yesterday, and I'm going play it some more today. There are people who play the game straight through with no anomalies. It just seemed like it was better than you know about them - and some of their possible solutions - than not.

or, we could fail