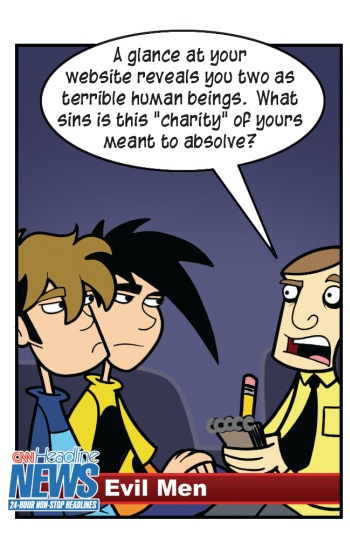 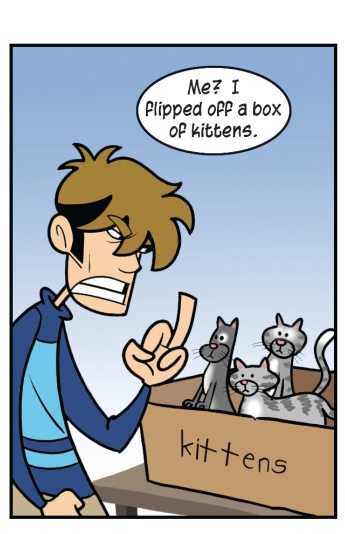 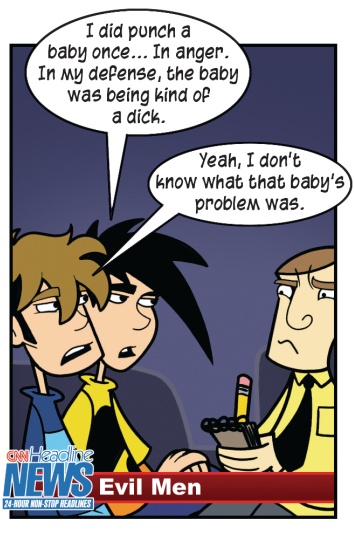 We sort of have charity on the brain at the moment. Our best estimates - between toys people have purchased and money that has been donated - come to about thirty thousand dollars. I didn't use italics on those words, which pains me, but I want them to stand on their own. Thirty thousand dollars. Take a look at just what the first two days of orders look like, and you will know joy. People are taking this as partly a way to communicate our traditions to a new generation, judging from the amount of Namco Classics, Zelda Gamecube bundles, and Links To The Past they have there. We've got orders from Germany, Ireland, London, yes I know that's not a country, Australia, New Zealand... What you people are doing hardly seems possible, I think I had convinced myself that the world was a bad place where worse things happen. We need to figure out where to focus this beam next year, and soon.

The new Napster makes me feel so conflicted.

On the one hand, hey, it's Napster! Remember him? He was our friend who went away! On the other hand, he's not really back. He's returned from some kind of lobotomy, with a row of ugly red stitches on his forehead like tracks to the ultimate nothing. What was once the scene of a great battle, a sort of consumer Alamo, is now a cute little shop which sells trinkets meant to evoke that conflict. Conceptually, it's problematic. You can fish some cool metaphors out of it, though.

Napster the free service is now Napster 2.0, the buy things service. In some ways it's an analogue of the iTunes service, complete with complimentary audio player. In other ways, it's insane. Let me tell you how.

So, you're welcome to peruse their catalogue of music and purchase songs for ninety-nine cents a pop, which it seems is about the price they're going to charge a person to download a song. There is a crazy thing they do with their "premium memberships" I'll get into in a moment, but I would say that the main thing that it different about their service is that, subjectively now, they appear to have a lot of Goddamn music. They have things I am looking for more often than they don't. I've used BuyMusic, iTunes, and Napster, and they all have content holes I need the other services to surmount. I just need to go off the farm less with the Napster client up.

Here's the weird thing I mentioned: so yes, if you want to burn tracks, you have to buy them. Ditto for copying to a portable device of some kind. You have unlimited burning of files, like iTunes, and unlike BuyMusic, but anybody with their head on straight just buys the tracks, burns them, and and rips them to MP3 so that burning proscription is about as resilient as paper mache. Let's say you just want to listen to music, from any PC, and burning stuff isn't really your cuppa. For ten dollars a month, you can play the full version of virtually any song in their library. That's a lot of songs. You'll run into some trouble with certain artists, or should I say their publishers - some tracks are "buy only," so they can't be used this way. For example, any Depeche Mode song? Available. Blind Melon? On three albums, all but three songs are playable. I thought they might reserve the best songs on an album or something, but that's not borne out by most of the ones I've looked at. It's some rights thing, and I would imagine that as time passes they will get more complete coverage.

Today is the last day of my free trial, and I'm trying to figure out if ten dollars a month is a good amount given the limitations on where I could listen to it. I really need to be serious with myself about how often I leave this chair. Once, twice a week?

to wrongly treat you unkind