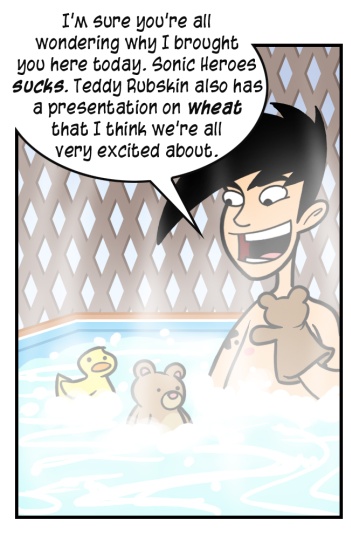 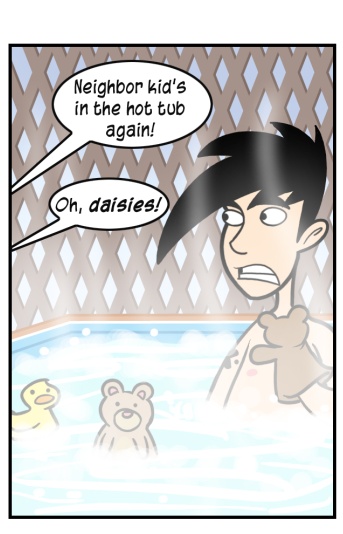 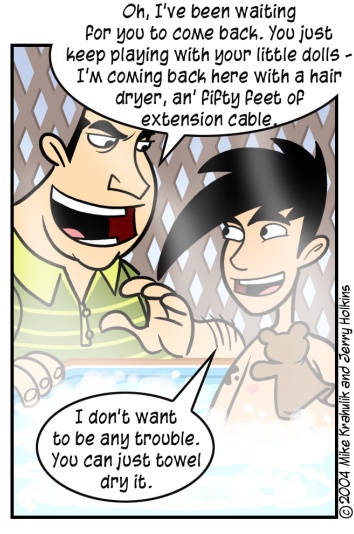 It became clear as we were writing the strip that it could not really capture what we were trying to say regarding Sonic Heroes, and that another method might need to be employed toward that end. Eventually, we settled on "language" as a means of communicating ideas.

Sonic Heroes hasn't done all that terribly review-wise, thought it would be difficult to say it was doing well. If it weren't a Sonic game, it could be shitty and stand no chance of piercing my cynicism, which years of game industry abuse has transformed into something like an exoskeleton. Instead, I'm left with the rather stark impression that Sega has either forgotten what makes good Sonic game, or they don't care. Well, I do. If the next Mace Griffin game is a game where you manage a restaurant empire, you know, no big deal. I think can state with conviction that there are very few who would even notice if the second Mace Griffin game recasts the grizzled space mercenary as a lively restauranteur. We're talking about Sonic, though, and I'd prefer that to mean something again.

There is a very interesting review of Sonic Heroes on 1up by Nich Maragos, and in it he presents the following "outside the box" concept: that Sonic-style gameplay is boring, and that Sonic Heroes is the worse for including it. That is funny to me, because the only time this game gets it right is when it casts off all the extraneous bullshit they keep adding - when it focuses on the things that made Sonic Mario's tireless nemesis.

Nich's reasoning goes like this: Sonic Team, for better or worse, keeps making games that have these large cats or robots and what have you, characters of divergent ability, and these other types activities never mesh properly with the straight-ahead, balls out Sonic speed the games seem to be oriented around. He and I are in complete agreement on this point - the game is a failure - but our solutions differ. He's resigned to it, he says as much - but since they clearly persist in making games of this type, they need to tone down the Sonic and let these other characters take a more central role if they want a game that feels at all unified in purpose. I propose precisely the opposite - jettison the rest of this bolted-on garbage and focus absolutely on the speed, rings, and quirky bonus worlds that define the classic games.

I'd grant that he's more likely to get his wish, because as I said before they forgot or don't care why Sonic was great. So if they make new Sonic games that go even further in this new direction, keep in mind that they would not be, strictly speaking, Sonic games at all, Sega might as well do what he's talking about because I won't be playing the fucking things anyway. The shame of it is that at the very beginning, Sonic Heroes implies a possible direction for the series that we hoped the entire game would embody - a game that, were you to turn the perspective to the side, would look very much like a 2d platformer.

They quickly get away from that, and indulge themselves in the same sorts of unappealing goofy camera, indoor bullshit that they apparently crave overseas - making a mockery of the classic Casino zones in the process. They've never been able to make that Goddamn camera work right, they seem to delight in misery of this sort, and I wonder why they don't let the game itself tell them what they're doing wrong. Lock the camera behind Sonic, or in front (as they did in clever sequences from Sonic Adventure), or to the side in the classic style. I'm ready for a return to a two-dimensional gameplay - used judiciously, when called for by specific zones and used in conjunction with the others. Combine these three perspectives with a cinematic view that kicks in when flying off bumpers or careening to some new phase of the level. I sincerely believe that streamlining the game to be one-hundred percent about hauling ass through interesting zones - which is to say, the gameplay they initially pioneered - would not only resolve the technical issues they haven't been able to surmount for the last three games, it would return the focus they lost along the way.

prolonging the situation only makes it worse