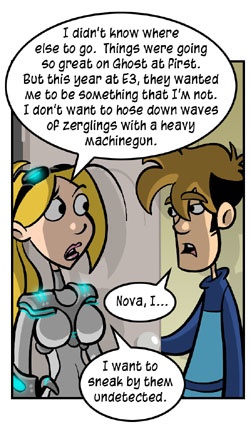 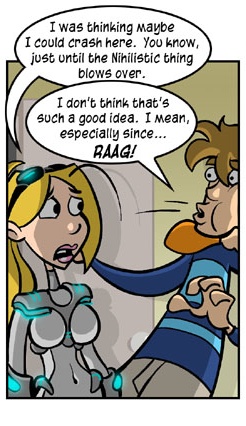 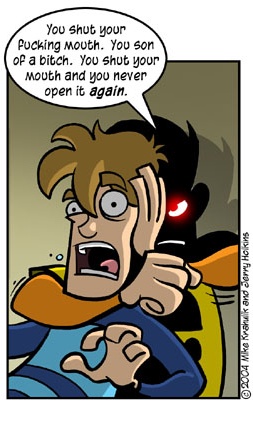 The first time I saw Ghost - this would have been a couple years ago, now - it was one of the most impressive things available on the floor. They took a unit from Starcraft, made a character out of it, and let you experience the galactic conflict of that setting as an individual: dwarfed not only by hulking war technology, but also by the scope and scale of imperial political machinations. At that time, they were really playing up the stealth/platform angle - and that makes sense. Ghosts are, as one might infer, covert operatives.

What we saw at this year's E3 seemed almost unrelated to the game that had so drawn me in initially. Both the guy demonstrating it (and indeed, the game itself) actively distanced what it was doing from that earlier, stealth based iteration. The graphics seemed to have taken a turn for the worse. It didn't make sense. By now, you've heard what I heard - that Nihilistic is no longer working on the title.

I've never understood what that relationship consisted of, exactly - the Nihilistic/Blizzard thing. Initially, we suggested that Blizzard brought them on to help them count all the money. So, I don't know enough to say whether them being out is a good or a bad thing. I find the announcement of that fact to be an oddly worded exercise in loose language, but that's neither here nor there. That Blizzard had a good thing, and then diluted it with a heavier focus on action that didn't feel right and didn't fit the setting - that's really all I care about. In this June 18th press release, Blizzard submits that it will be using the time between now and release to "expand and evolve" the game's design - although whether that means they're going back to a more authentic Ghost experience or hurtling farther forward into overt violence I couldn't tell you.

Stealth games are sort of epitomized by Metal Gear Solid and Splinter Cell, to be sure - hojillion dollar budgets and taut universes dense with political peril. Playing Thief recently made me realize just how much wider and more enjoyable that field could be if it could, in the manner of a healthy genre, entertain more geographically and chronologically disparate locales. If Blizzard thinks they've got a good thing going with this new motif, fine - perhaps what I saw was some half-dressed transition state. I just think there's room for them at the upper echelons of tactical stealth, with their delicious art and their tattered star systems. Of course, they should know that too - they're the ones that made me believe it.

he hung himself with a guitar string