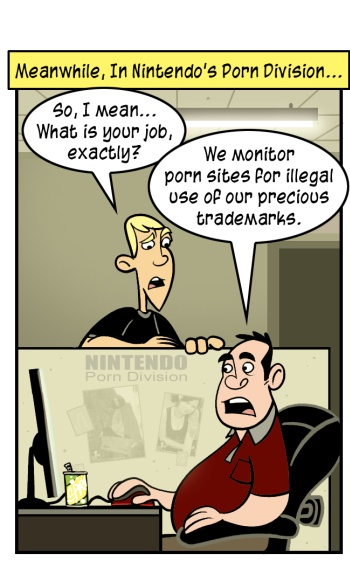 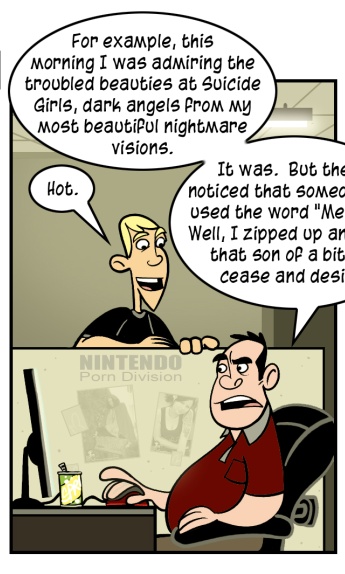 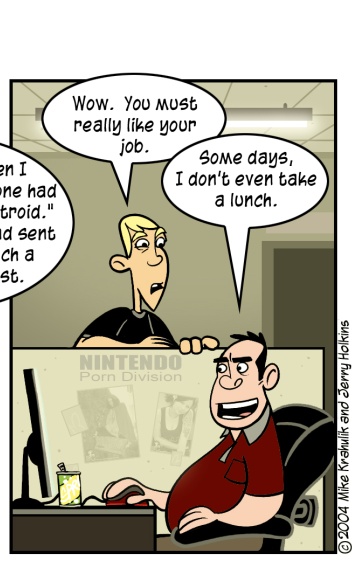 I'd say it's better than even odds you've seen the story, either at VE or Slashdot. The long and short of it is that someone said they liked a couple Nintendo games in their SuicideGirls profile - and, in a parody of the reasonable universe, lawyers bared their teeth. I have a hunch we're talking about some kind of perverted spider application, an automated process with a bottomless appetite for filth, but it's funny to think tracking down meaningless infractions like this is some guy's fucking job.

I guess I should say a few things in advance of this discussion. SuicideGirls is a site where, among other things, girls take off their clothes. I'm not saying you should go there or not go there. They've asked to advertise here before, and while I don't have any great qualm with titillating media I didn't know if it was the best match for the site. It may be that my scheme for rating pornography has been damaged by the Internet, but the site is actually pretty tasteful compared to other sites I have subscribed to, many of which are filmed in barns.

Now, with the caveat out of the way, I am not without reason: I can understand why Nintendo as a corporate entity might not want their juggernaut brands associated with teen coochie. And indeed, if we were talking about photosets with explicit connections to their brands I would be less likely to ridicule them for it. I can even envision a scenario where a girl might have a Mario tattoo or something, and they might have something legitimate to say in that case, but honestly now I'm just indulging some kind of fantasy.

At this point, I don't care if it was a spider or some asshole at a terminal somewhere. When we did our Strawberry Shortcake comic, I was able to come to terms with the fact that there was an interpretation of my country's laws that prohibited what we had done. I didn't like it, but I could connect the dots and we relented. This, on the other hand, is merely stupid and evil. For better or worse, their company is built on these ancient, perennial brands that sprout up again on each new system. The reason it works is only partially because they tend to make excellent games - they deal gently with those classics, modernizing what they need, and somehow manage to retain a sense of wonder. But Nintendo's success hinges on the fact that their characters have become cultural icons - and being cultural icons means that we as gamers take an ownership in those franchises. They're a part of our language and, if you're the sort of person who reads Penny arcade, your culture.

It's not legal ownership, no - but we're heavily invested in those characters. Which I guess is a crime.

Update: Or, maybe it's not. Someone at Nintendo figured out this was stupid - BoingBoing has the letter they sent out.