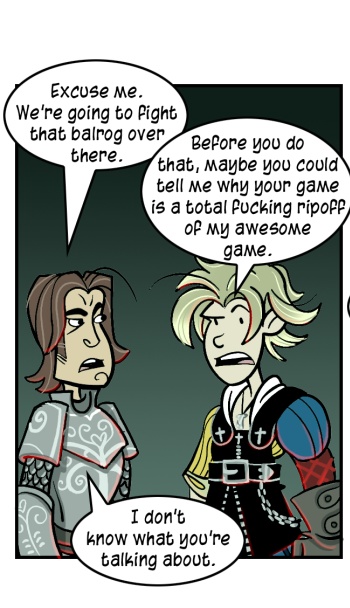 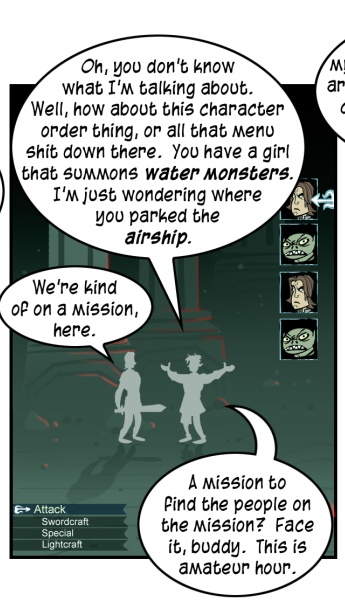 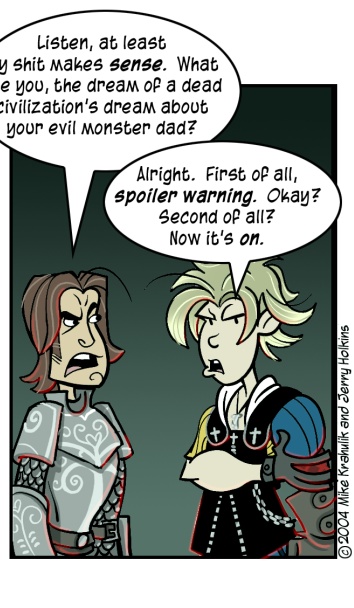 Grabbed Lord of the Rings: Third Age yesterday, and regardless of anything that is implied by the strip I'm perfectly happy with it - probably because I know what it is and I don't expect it to reform the genre. It is a delicious electronic pork rind, and I'm going to sit right here on the Goddamn couch and eat it.

I can understand if a person likes Lord of the Rings too much to play a game that takes liberties like this, putting mystical artifacts and elfin delicacies in conspicuous forest chests. Some people simply won't tolerate canonical gymnastics of this type, and being a stickler on the subject certainly bears no shame payload on this site. At the moment, I genuinely want what's on offer here - a fast-paced RPG that will let me kick ass on a monster dog.

Picture something like the Final Fantasy games we compare Third Age to in the strip. Now, remove that extra bit of subdermal OCD that series tends to foster. I'm referring to systems that that add that extra bit of richness in exchange for some of your sanity, like a Sphere Grid or job system. Skills are drawn from simple trees that advance with use. All items and equipment come from drops or chests, which streamlines it even further. Even Diablo has a store, and it's considered about as low to the ground as an RPG can get and still be, well, an RPG. Honestly, and again, I'm just in exactly right mood for it, with the countryside infested by orcs unified by an undying evil, I'm having a hard time picturing my characters haggling with a shopkeeper over some lembas bread.

I was surprised to learn that Third Age covers all three films - as I mentioned once before, I assumed EA would find the Trilogy Cash irresistible. The game literally yelps franchise, if you put your ear close to the disc you can hear it. I'm sure some clever person over there can figure out a way to wring another retail product out of this concept, and I hope they do. With a touch more depth in the systems and narrative - the natural domain of sequels - they could have something that is a great deal more than good enough.

jumping when she claps and that