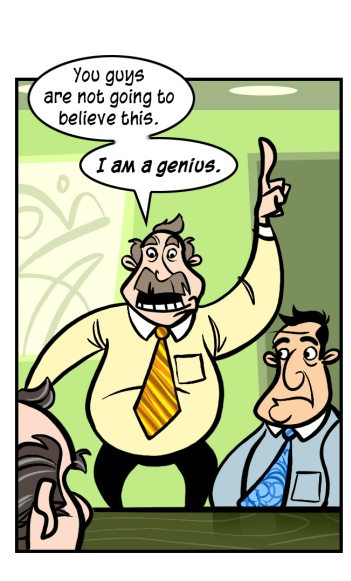 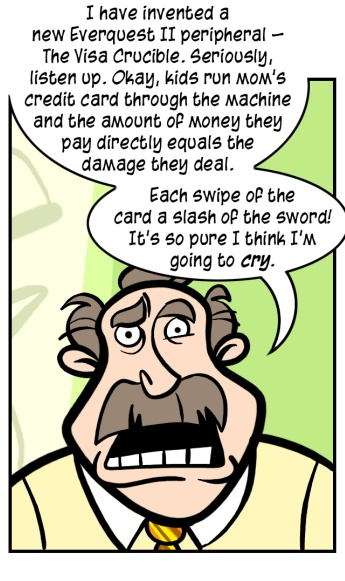 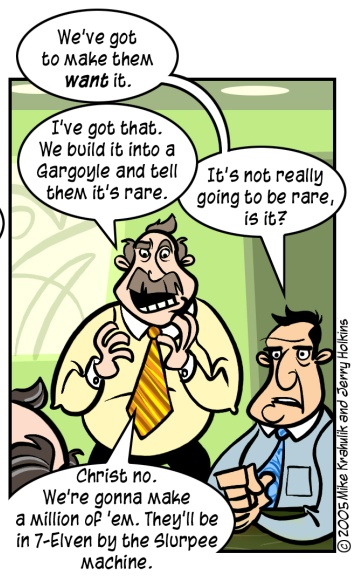 A few days ago we discussed SOE's "Station Exchange," their plan to bring game auctions of items and currency under official auspices. The long and short of the piece was that:

1. It's happening anyway
2. It's hard to imagine what took them so long
3. Ultimately, companies will find the money irresistable

but Mythic CEO Mark Jacobs recently went on record as being against this practice in the strongest terms. Our original conversation was about exchanging money for game content from a business perspective, which bears a kind of irresistible logic. From a community perspective, clearly there's a percentage of players who engage in it - a percentage large enough for SOE and other companies to monetize the practice - but by and large I think this sort of thing is considered somewhat abhorrent.

The comic strip we have provided today is asinine, but the analogy is essentially correct. Just as the well-heeled Magic: The Gathering player could fortify their deck with the capacity for icy manipulation, a practice most players found repugnant, now people willing to pay more above and beyond the monthly charges can best you with items of unsporting origin. The notion that people are already engaging in exchanges of this type in unauthorized, black-market fashion sounds pretty smart when used in a rebuttal to opponents of the new policy, but engaging in despicable behavior because others are doing so has rarely been considered an excellent defense.

The reason other companies have been loath to do it - even in the face of unsanctioned purveyors of these illusory quantities - is because it is weak sauce. Everyone knows these things are going on, but incorporating it directly into your business model is a bridge too far. We're already talking about a genre many gamers still cynically avoid, rented games you never quite own, belured with mechanical, repetitive tasks the mind finds difficult to resist. Stamping the practice with their imprimatur is not merely making a deal with the devil - it is becoming a kind of devil.

they condescend to fix on me a frown