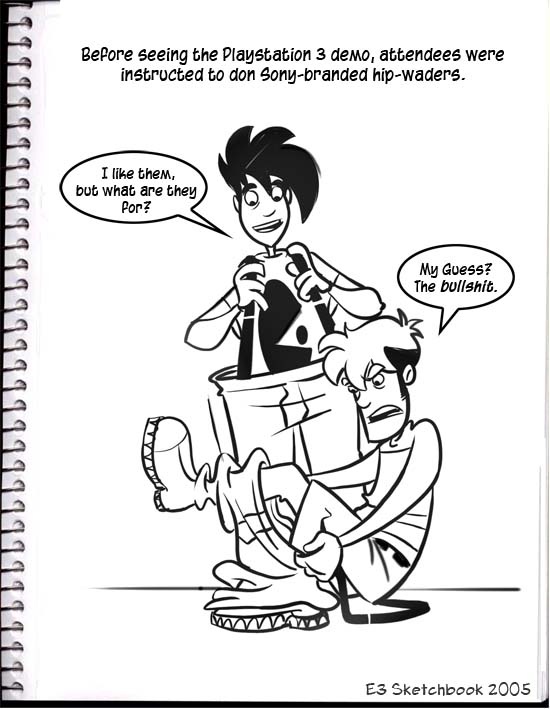 I'm hardly trying to foment a new generation of system wars, but Sony this year virtually epitomized the "puppet show" motif I discussed a few days ago - and it appears to have worked for the most part, at least as far as non-game media is concerned. I don't believe there is any such thing as a "Playstation 3" yet, and I don't believe in the Killzone video. What I do believe is that Sony harnessed the media and then rode it from place to place, one hand on the bridle while the other waved madly in the air.

MS did something that really destabilized the natural order of these things - first by coming out swinging at GDC, and then with their televised abortion on your Music Television. That's not how it usually goes down. E3 is insane, leaks do occur, but there is a place for these things and it's not when they did it. In the face of these competitors, I don't know what else they could have done. The hardcore in my circle were left wondering why Sony or Nintendo didn't return fire, why they'd leave the channel open to be dominated by a torrent of competitive data. For the moment, put aside the fact that the companies we're talking about lead the industry in their nation in many parts of the world, and are extremely proud - businesses who I doubt really feel the need to respond to Microsoft. In the long run, the "hesitance" we detected has been largely irrelevant.

News organizations certainly inform us of new events, "news" being the plural form of new. But there is a kind of storyline that these things hook into, a story about "the nation" or "industry" or whatever, that relates our lives to whatever thing they're talking about. Some of these tones jump out at you. So when Time gave Microsoft the cover before E3, the theme was "The Usurper," a not uncommon tale about the scrappy sophomore vying for the throne. It's a powerful theme, and it got them a week or so of fawning press, but it flows right into The Liege Ascendant, where the reigning king slips back Odysseus style and kills all the suitors.

The only console-exclusive I saw running and playable that really struck me as a next-generation experience was Epic's Gears of War. I'm not "putting my weight" behind the 360, I'm saying that at this particular show, it's the only system that I consider to have been truly "launched." Nintendo's system has been introduced, in the vaguest sense, but without seeing what they intend to accomplish with their controllers we don't actually know why it would hail a Revolution. Sony showed some movie trailers in HD, said that their console could create "artificial life" and expected us to swear fealty to their system's now dynastic lineage. They even showed the intro from Final Fantasy VII in "Real Time(!!!!)," but I can't possibly be the only person who remembers they trotted out a "Real Time" dance scene from VIII when they launched the PS2 - can I? You ever see shit like that on your Playstation 2?

what the fucks is goins on