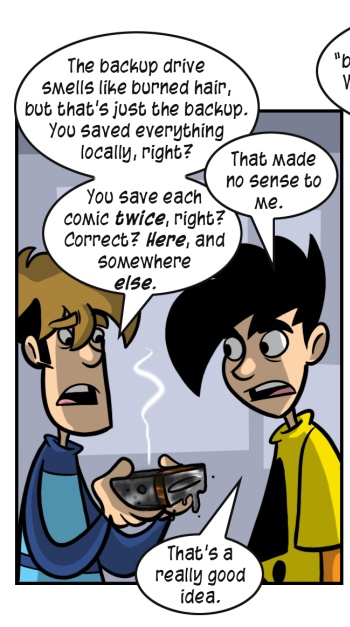 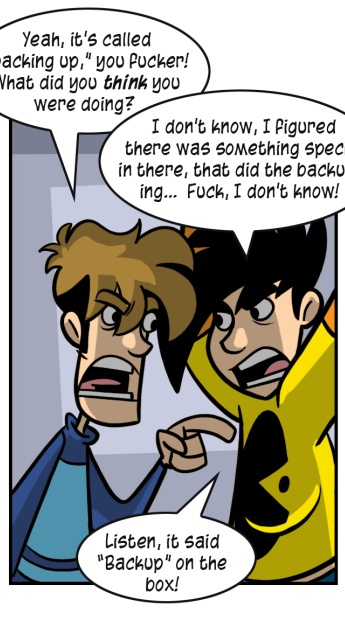 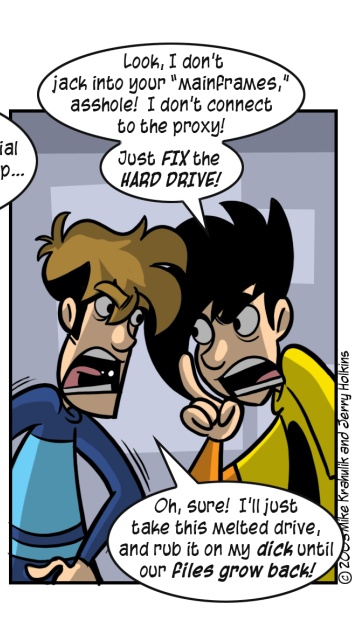 I can remember being so proud of him three years ago when he braved the Morlocks at CompUSA and picked up a little USB backup drive. Now, I'm not even sure he knew what he was buying. This is what he did when he got it: he copied every crucial thing off of his computer, to the backup drive, at which point he imagined some mysterious process was, shit, I don't know. Mummifying his data. Our data, everything we've ever done.

I'm not, like, Mr. Computer guy, but this I know: there are no small men in a backup drive who will rub your data with oils. Oils of any kind.

He brought it to me like a wounded thing, scorched around the front, as though it had fallen through the atmosphere. I can assure you that the fight in the strip is a complete fabrication, because he knew what he held there and he knew what it represented. He began to bargain with me in that way one does, I'll never do it again, oh, please mister, but the machine didn't die because he was bad, and no amount of promised good behavior laid toward some future deed would return the thing to life.

Do me a favor, and run your backup process right now. It would make me feel better.

I couldn't make it "go," but it weren't for lack of trying. The wound was simply deeper than my folk remedies or intuition had the power to cure. I was exhausted by the end. I felt like I was nudging the last egg in the nest, encouraging it. "Live," I said. Do as your brothers and sisters have done and live.

We sent it to a place that be all hermetic, with a clean room and everything, and they sent us back a bill that is essentially a ransom note. It lists all the data they have hostage, and an itemized price for their release. I didn't check to see if there was some byzantine procedure for "the handoff," but I don't doubt that it is on there, perhaps somewhere below their fee - a number truly inconceivable, immutable, like the written name of God.