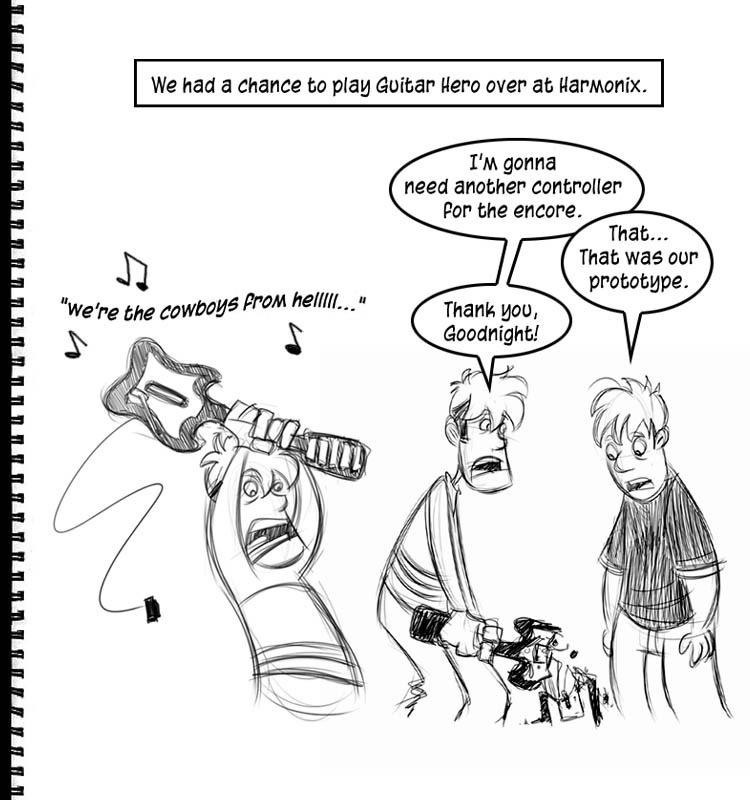 I love the entire idea of preloading. Even though I'm not actively engaged in the process, I somehow feel more productive. It's like watching those home renovation shows. When that data arrives, I'll feel as though I've had a full day.

I'm not sure if I'm supposed to compress the last three days into your human words, or if such a thing would be interesting even if I did accomplish the feat. There were many new experiences: we had a flight in the middle of the night that we could upgrade to business class for thirty five dollars, and we did so. I've got thirty-five bucks. I had a theory about how it would go, and it proved absolutely correct: when I travel business class, I am simply white-knuckle gripping a slightly more comfortable chair. Never again.

I'll cover our "lecture" and the Convention (such as it was), but chronologically we need to begin with Demiurge and Harmonix.

I feel as though our ability to truly flex our credentials is governed by a bar of some kind, and this bar regenerates very slowly so I only utilize this ability when it is absolutely necessary. I will tell you that I have been trying for months to figure out some way into Harmonix while we were on your east coast, my gesticulations to them becoming more pronounced over the course of this period, the final e-mail to them consisting of the phrase "Do You Know Who I Am" in all caps. This mail received an auto-reply that stated he would be out of town. So I figured that was that.

Demiurge Studios is out there was well, and we'd wanted to meet them - they did a really cool mod called Clone Bandits, but since that time they've become sort of "go to guys" to make content and flesh out a retail game. I've really been wondering what the seven guys in a room developer is supposed to do when confronted with next-generation content, and it was such a comfort to see that they've made a place for themselves. What's more, they've banded together with other groups their size to make a go at their own project. It's what you might call a "distributed garage" approach, and I'm just glad to see that it exists in any form.

They're a great group of guys, even though they smashed us in Brothers In Arms. I maintain that "sploitz" were employed. Oh, and their office is in the same building as Harmonix. So they hooked us the fuck up.

Harmonix was in the middle of some kind of celebration, perhaps because they are so awesome - maybe they just have Awesome Days like this every now and again, but the time of our arrival was auspicious. I think that things are really moving along on Karaoke Party and Guitar Hero, and they took a moment to recognize it.

When you beat Frequency, another Harmonix game, superimposed over the swirling colors is an expression of their ethos: They want to give people the experience of playing music. It's a nice thing to say, but they aren't just saying it. That isn't some weird mission statement uncorrelated to their behavior. Frequency and Amplitude were fiendishly difficult Rhythm/Puzzlers, with an engrossing remix mode that let you remake any song - but your interactions were designed to make you feel as though you were conducting the music. I said as much as the time: once you play it, it's hard not to think of the PS2 gamepad as being itself a kind of instrument.

I've already raved about their new game, Guitar Hero, and that was before I played it. I don't exactly understand the Red Octane connection - Red Octane, which rents games, sells games, and makes custom controllers for music games. I'd considered grabbing their guitar controller for Robert's Guitar Freaks import, but then I saw something shiny and bounded off after it. In any case, they could have gone to anyone if they wanted to make a US guitar rhythm game. It could have been the kind of low-rent, pack-in shit you're made to endure whenever there is an interesting peripheral without wide industry support. But they went to Harmonix, who as I have stated before takes communicating the music experience to be a kind of spiritual calling. They knocked it out of the fucking park.

If you're familiar with Guitar Freaks, the gameplay won't surprise you - using a custom peripheral, you play songs based on note data that appears on-screen. You "strum" with one part of the controller while depressing the "frets" at the top. Konami has never deigned to bring it here, but the template was set when it came time for something "home grown."

Guitar Hero switches it up by adding two more frets, for a total of five. Not only will this allow the daemonic levels of difficulty they are known for, it allows for finger positions that feel extremely authentic. Guitar Freaks has a lot of diversity, musically - J-Pop, some 80's rock, it's all over. Guitar Hero is not about that. Guitar Hero is about rocking your fucking face off.

And it's an eclectic mix of songs, too - I wouldn't have called groups like Pantera, Bad Religion, The Donnas, Boston, Black Sabbath, and Cream. The game's thirty official tracks are full of shout-outs. Helmet? Megadeth? I mean, come on. That is shit-hot. Unsigned bands have been able to send in music to be a part of the game, as well - they make up some of the eighteen bonus tracks. With four levels of difficulty, there's a lot of play there. We saw two of the guys there play Cowboys From Hell, and the gameplay was note for note - every symbol on the screen correlated to an actual note from the song. It must have been exhilarating.

It has genuine guitar features like hammer-ons, and a whammy bar you can use to bend sustained pitches. It has an amazing "show poster" visual aesthetic that had me by the balls. I asked the producer if it had co-operative play, and he suggested that it didn't, but I think we must have been talking about different things: I played probably seven songs with Robert while I was there, and it was unbelievable. They've broken the guitar lines up exactly right, and when two guitars play in unison you can feel it in your bones. You can absolutely play with friends, and the songs have been programmed in such a way as to capture the drama of a twin guitar assault. So if I destroyed their prototype and kicked over their PS2 Development Kit, well, maybe they shouldn't have simulated the rock experience with such precision.

you and me have a disease