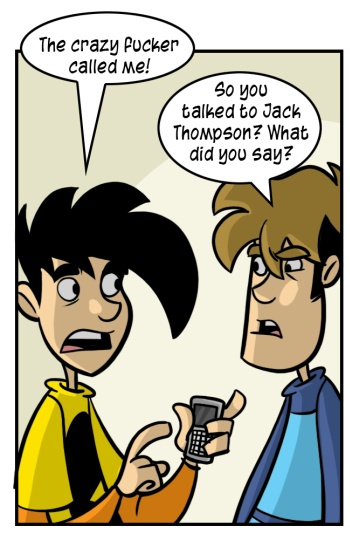 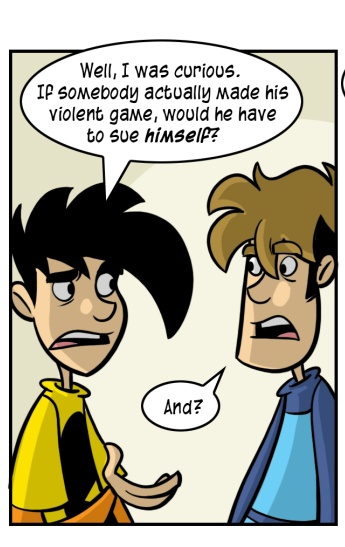 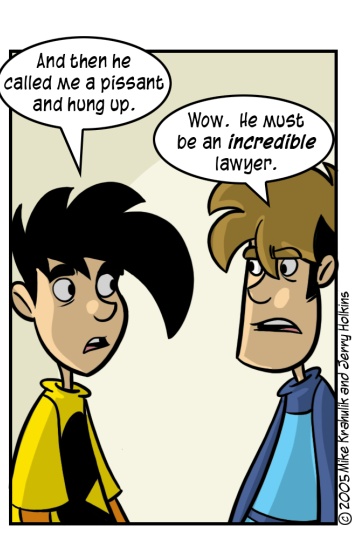 Jack Thompson really did call him, but I should tell you how that came to be.

As I've suggested in this space before, Gabriel's "super power" (if you will) is to suss out the exact thing that will drive a person out of their fucking minds. He's only utilized this ability on me twice, and it stings to recall them. They're actually too cruel to relate. It's important to me that you sort of like him, even in the abstract.

He felt certain that the over half a million dollars raised by Child's Play would jab him brutally. He was not wrong.

So certain was he that this knowledge would barb the codger into wild madness that he included his phone number in a hastily composed "sig." He was not surprised in the least when a number he did not recognize appeared on his cell. I was trying to collect the Iron Golem soul, I was busy at the time.

Gabe turned to look at me, not just with his head but his whole body, a single motion that had a mechanical look. He asked if it was really Jack Thompson, and it was at this point I knew he had done something wrong. I don't doubt that his adventures, both online and off, are a source of amusement for a percentage of the readership. Secretly, I delight in them - but he must not be allowed to know. His glee in these endeavors is already a kinetic force.

Conversation one is where Jack Thompson asks Gabe if Gabe has ever donated to charity. Of course, we have - it's usually a couple Gameboys a year for Child's Play, but the "take" from the distributed gamer metamind is over five hundred thousand dollars in two years. This answer did not satisfy him. He suggested that if Gabe mailed him again, he would be sued so fast that his head would "spin," and that he, Jack Thompson, had given more to charity that Gabe could even imagine. Gabe isn't very good at math, so he may have a point. I'm told that humbers larger than ten give him a headache. What's more, his donations were more valuable, because he wasn't some flush-with-cash game company. Which I guess is relevant to us, because... Well, I guess it's not relevant.

Then he hung up.

Usually when a person threatens us with a lawsuit we don't really pay attention. The fact of the matter is that rude people and idiots often try to threaten people by gesturing wildly at the edifice of the legal system. But this man is actually a lawyer, and also demonstrably crazy, and he apparently has time to call random people who mail him on the phone so maybe he's looking for something to do. In any case, we aren't a flush with cash game company, so at the very least my cohort wanted to excise this erroneous statement from the record.

This next mail elicited a second call, which we have detailed in the strip. Gabe's own voice rose triumphantly throughout this phase, I thought perhaps he was just getting into the rhetorical spirit of the thing, but the reality is that Jack screamed at him the entire time. The point he submitted went without answer: if a company made his reprehensible game, he would literally have to sue himself and talk about what a bastard he was on national television. Of course, he's not serious. Machination is too glorified a word for what he's doing. Ruse would make it seem debonair. He's essentially holding money hostage from charity, and if someone did make it, even as a joke, he would say that it didn't conform to his "design." This sort of thing is usually called a shell-game. The song license itself he mentions - Lawyers In Love - would probably run anywhere from ten to fifteen thousand by itself.

This vile "challenge" Jack Thompson has put to the supposedly monolithic "game industry" is like a topographical map of the twisted fantasy realm he inhabits. I could excerpt it, but I don't want to be accused of selective editing. The reality is that what he suggests is grotesque. I mean that it is literally disgusting. Of course, the violent acts he's cobbled together here from other games are robbed of a narrative context in which they make sense. Killing Gamestop and EB employees, though? That's not metaphor. He's not being metaphorical. He is batshit fucking loco insane.

In the games I play, I've spent the last week performing surgeries and saving lives - whenever I wasn't in court defending the wrongly accused. You know what I'm saying? Just steeped in subversive moral messages.