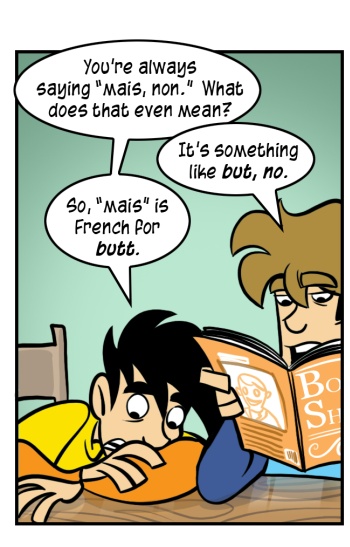 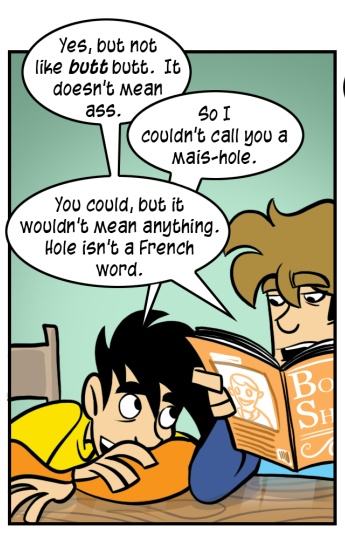 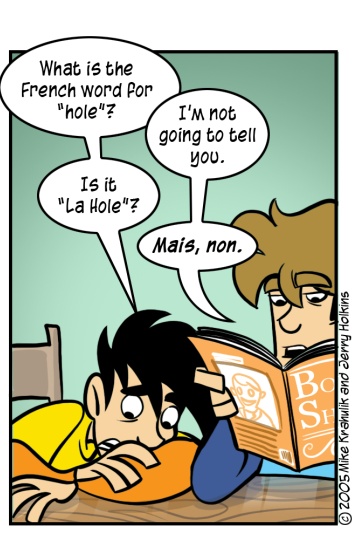 Typically Gabe just scowls when stubborn traces of French II surface in a conversation, but yesterday he decided instead to mine la belle langue for his own perverse ends.

Most of us are probably still familiar with the term "Foxed," I imagine - it is the process by which your Aliens mod, done in reverence, a natural outgrowth of your obsessive enthusiasm for a corporation's intellectual property, gets you sent a terse communique on official letterhead.  The old Cease and Desist, as it is called.  No actual foxes are involved.  I know there are still furs who read the site on occasion, and I apologize if I got your hopes up.

Since it is usually my presumption that things will go terribly awry, off the rails so to speak, possibly off a cliff to be submerged in lava, whenever I hear about a fan project - pure of heart, as I said, done only in reverence - I try to avoid mentioning it.  I hate that, but if the powers that be can pinpoint a single S&M Strawberry Shortcake amongst the high-grown wilds of Interspace, I don't want to be the one to instigate a good and proper foxing.  Again, just so there's no confusion -  it's a neologism, jargon:  class, legal.  No foxes.

So it's actually kind of fun to mention King's Quest IX: The Silver Lining, because Vivendi Universal has (in what I find to be a startling manuever) given them the go ahead.

I hope that this "royal seal" draws talent out of hedges and holes that might otherwise have simply observed the process from a safe distance, outside what you might call the effective range of the legal apparatus.  Such a game is like a no-cost expedition into the dark twists of Sierra's sleeping archive.  If it produces a hit, a strike somewhere in that twilight realm, they already own the rights and can make excellent decisions regarding the franchise in the future.

Halo Zero I saw mentioned over at 1up, a sidecroller like Codename: Gordon but locked into the Halo franchise instead of Walve's own scrumptious continuity.  I don't know if it gets much bigger, in raw brand terms, than Halo - and I haven't heard word one about retaliation of any sort.  It's pretty neat, and I get the impression that H0 is a codification (perhaps?) of Eric Nylund's prequel novel, The Fall of Reach.  It was made in France, which I think lends this post a nice sort of concenptual continuity.

sun so hot i froze to death