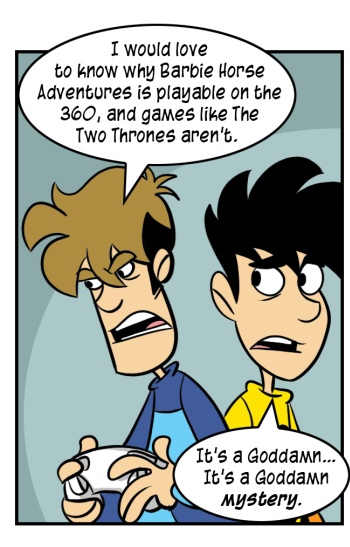 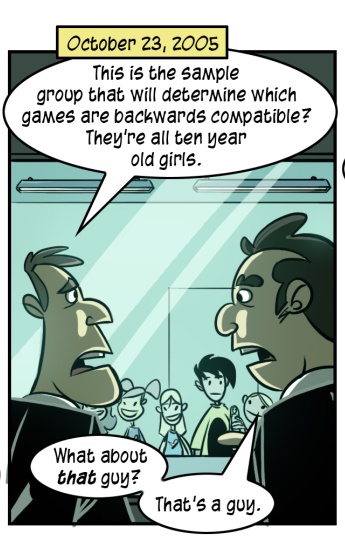 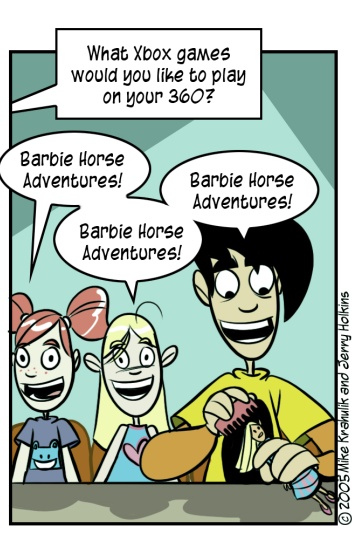 After seeing that Barbie Horse Adventures was on the list, and recalling this old strip, we really had no choice.

Xbox compatibility for the new system probably hits the high notes for the vast preponderance of gamers, and it should, because they know what people use their console for.  I've been in the frigid room with the equipment that runs Xbox Live, I know that they know what games are being played, how long, by whom, what they were wearing at the time, as well as their top ten albums, and if a constituency for a given title was ou there it was most likely prioritized - and then, whatever just worked got thrown on the list as well.

The issue is that playing old games isn't what I use backwards compatibility for.  I know there are "peeps" who need constant Halo 2 infusions, but I don't look back - I think of the original Xbox as a damned place, a Sodom and/or Gomorrah.  What I need is a technology that will ease the middle period, while the old box is still a viable development target at retail.  My audio/visual shelf is already a treacherous, high-stakes game of Jenga as it is.  There's no physical space for some Goddamn artifact up there.

I had access to the compatibility list when I brought it home, so I'm not saying that I was somehow deceived regarding the capabilites of the machine - they are simply unfolding a different strategy than the one in my naïve fantasy.

They released a compatibility update earlier in December that added much of Ubisoft's Live ouvre for the original box, but a Halo issue caused them to pull it.  Between the time we wrote the strip on Friday and the time I finished this post, they appear to have re-released the compatibility update.  I'll verify this of course, I haven't seen it anywhere.  But having Chaos Theory back would take the sting out a litte bit.


I know it's past visiting hours